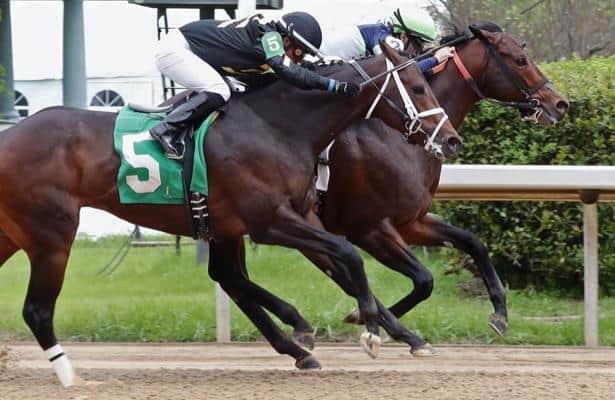 Having battled throughout a one-mile allowance optional claiming race with Shooters Shoot, the 3-year-old son of Oxbow lost by a neck with another 5 3/4 lengths back to Mo Mosa in third.

"We're really pleased," Sharp said Sunday. "He just ran into another really good 3-year-old. It was a fun race to watch. I wish we would have come out on the other end of the head bob."

Blackberry Wine's connections are still aiming for the May 2 Arkansas Derby (G2), said Sharp, who conditions the colt for Calumet Farm.

"We're at Oaklawn, and he came out of the race in good order," Sharp added.

With $96,610 in earnings, Blackberry Wine may be cutting it close to cracking what should be a full field of runners in the only 2020 Kentucky Derby prep currently on the schedule. Some horsemen have also expressed hopes the 1 1/8-mile race could split into two divisions.

The Arkansas Derby, a 100-40-20-10 points qualifier, would mark Blackberry Wine's second try at the Derby trail after he ran seventh in a division of the Risen Star (G2).

Since then, the colt had previous victories stripped due to a positive test for a banned substance, which Sharp called an honest mistake with deworming medication. As a maiden again, Blackberry Wine returned March 14 at Oaklawn, where he romped to a 13-length victory and finished 1 1/16 miles a tick faster than Rebel Stakes (G2) winner Nadal later on the card.