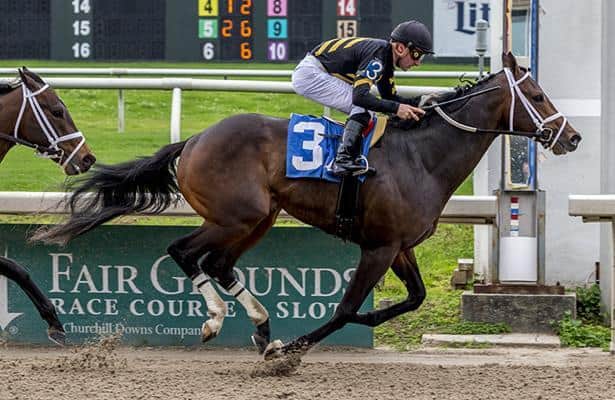 Nominations were to close Monday for Churchill Downs' first stakes offerings coming up on May 23. But promising 3-year-old Blackberry Wine won’t be in the mix.

Trainer Joe Sharp said the Oxbow colt suffered a "minor injury" in his most-recent workout, which measured four furlongs in 48 seconds on April 25 at Oaklawn Park.

There, earlier in the meet Blackberry Wine had re-broken his maiden after seeing previous victories vacated due to a medication positive, then finished second by a neck to Shooters Shoot in a one-mile allowance optional claiming race.

Sharp had hoped to, from there, enter Blackberry Wine in a division of the May 2 Arkansas Derby (G1). Instead, Blackberry Wine is resting up at Calumet Farm and is "expected to be back in training within 90 days,” said Sharp, who declined to share specifics on the injury.

Blackberry Wine presumably would have been a candidate for Churchill Downs' Matt Winn Stakes (G3) for 3-year-olds expected to be headlined by Maxfield, who hasn't raced since winning last fall's Breeders' Futurity (G1) at Keeneland due to a setback of his own.