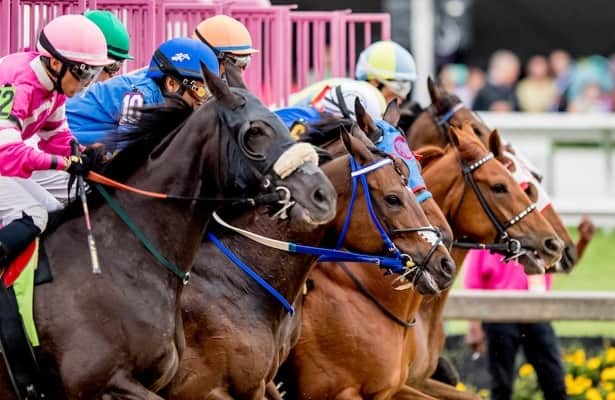 Growing up in Maryland, Black-Eyed Susan Day was a traditional outing for my family for many years, and the memories are still vivid in my mind. My mother was a big fan of Weber City Miss, and she made a nice score on that wonderful filly on our very first Black-Eyed Susan venture in 1980.

I went with my grandmother one year and a wicked thunderstorm left us wet from head to toe. That was a wild ride! Over the years, I had the pleasure of seeing very nice fillies win, including Grecian Flight, Serena’s Song, Silverbuletday and Jostle.

Beautiful Gift is the morning-line favorite for the 2021 renewal and she might be worth trying to beat at underlaid odds from the outside post. Before deciding how to bet Friday’s Black-Eyed Susan, the 13th race at Pimlico, let’s meet the entire field.

#10 Beautiful Gift (9-5) stalked the pace and fired trifecta shots in all four starts. She gamely ran down Moraz in the Santa Ysabel (G3) and missed by a half-length in the Santa Anita Oaks (G2) last time. Her winning rider, John Velazquez, strings along, and Bob Baffert has good stats with shippers. She was part of four-horse fields in her last three starts and will need to work out a trip from the far outside post in this much deeper, competitive event.

#8 The Grass Is Blue (6-1) removes blinkers for Chad Brown, and she proved she could travel a mile and an eighth in her Busanda Stakes victory Jan. 24. She disappointed in her last pair but hooked her talented stablemate Search Results in those two races.

#9 Adventuring (4-1) fired in all four starts, and three of those races were originally scheduled for turf. She switched to all-weather ground and smartly captured the Bourbonette Oaks March 27. Brad Cox’s filly improved her speed ratings in all four starts, and her classy pedigree catches the eye. Multiple graded stakes winner Pioneerof The Nile is the sire and dam Questing won the Coaching Club American Oaks (G1) and Alabama (G1) at Saratoga in 2012.

#1 Army Wife (8-1) exits an OK show finish in the Gazelle (G3). She continues to improve for Michael Maker and should save all the ground behind the speed under Joel Rosario.

#6 Iced Latte (8-1) is lightly raced and mildly interesting from a pace perspective. She reunites with her winning rider Luis Saez and is probably going to attempt a theft.

#2 Willful Woman (12-1) is 2-for-2 on wet tracks, but it looks like dry weather this week in Baltimore. She had lasix in both of those wins and will be without that medication in this graded route. She projects a stalking trip and seems to be slowly improving for Steve Asmussen. She ran last in her lone stakes attempt in the Honeybee (G3) March 6.

#3 Spritz (20-1) was much improved in her last three all-weather routes at Turfway Park and exits a runner-up finish in the Bourbonette Oaks at 39-1 odds. Flavien Prat rides, and she will likely try to get into a forward position early.

#4 Forever Boss (15-1) easily handled three rivals in an allowance race originally scheduled for turf at Keeneland last time. This is a much tougher and deeper field.

#5 Lady Traveler (12-1) is 0-for-4 in the stakes ranks but did land the place in two of those races. None of her races really jump off the page, and she needs to run faster to threaten these.

#7 Miss Leslie (15-1) captured four of her last six starts from off the pace, including the local Weber City Miss Stakes on April 24. She was an outstanding $25k claim last fall and will try to get involved late.