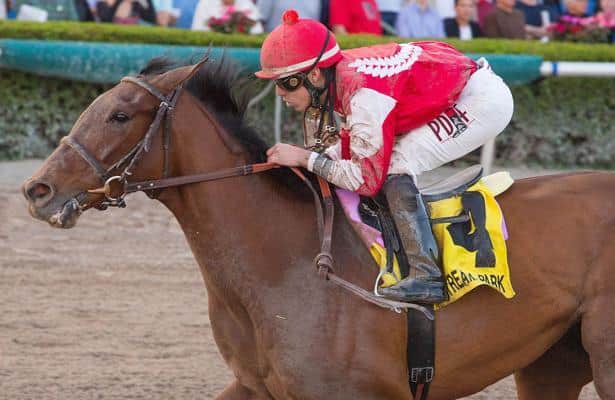 Looking for a spot to get Birdatthewire started in her 3-year-old campaign, trainer Dale Romans thought he found a logical one Saturday at Gulfstream Park. The fact that the filly would have to cut back to a sprint and face winners for the first time in graded stakes off a maiden victory hardly factored into his thinking.

Birdatthewire proved Romans right, sitting off a fast early pace before flying down the stretch late for a 3 ¼-length victory the $200,000 Forward Gal (G2), the last of four graded stakes on the $400,000 Lambholm South Holy Bull (G2) program.

Ridden by Irad Ortiz, Jr., whose brother, Jose captured the Holy Bull aboard Upstart one race earlier, Birdatthewire ($25.60) ran seven furlongs in 1:24.92 on a fast main track. Lassofthemohicans closed to be second, a neck ahead of the Romans-trained Taylor S.

“There was nothing to lose, so there was no real concern. We could always back up and go to an allowance race,” Romans said. “It looked like the race, if you handicapped it ahead of time, was going to be full of speed. I thought she could settle and come running, and it set up perfect. It’s good when a plan comes together.”

Breaking from post No. 4 directly outside her stablemate, Birdatthewire ran next-to-last in the 11-horse field while Enchantress led through a quarter-mile in 22.50 seconds and a half in 45.36. She began to fade as Ekati’s Phaeton and 2-1 favorite Seduire advanced, while Birdatthewire steadily gained ground on the far outside.

“I had read the paper and knew there was pace in the race,” Ortiz said. “Why change her style? I just let her relax. When we got to the quarter pole, I knew I had a lot of horse. I knew she was a nice filly. I think she can get better.”

Birdatthewire forged a short lead turning for home and sprinted clear while Lassofthemohicans made a belated rally. Running in mid-pack throughout, Taylor S made a late surge to edge Grade 3 winner Ekati’s Phaeton by a neck for third.

“I loved the fractions for [Birdatthewire], but I didn’t like it as much for Taylor S. That’s the good thing about having a 1-2 punch,” Romans said. “They both ran great races. I knew I had Taylor S that could be out close to the pace if the speed didn’t materialize. Taylor S is a really good filly, too. She probably reacted a bit off that really last [last] race, and this filly came rolling.”

It was the second consecutive win and second in five starts for Birdatthewire, a sophomore daughter of Grade 1 winner Summer Bird owned by Forum Racing. She broke her maiden in her juvenile finale last November, her third straight try at 1 1/16 miles.

“This filly had a nice number pattern, she was going in the right direction, and she did everything right,” Romans said. “She seems to be getting better all the time.”