Billy Batts looking to get back on track in Iowa Derby 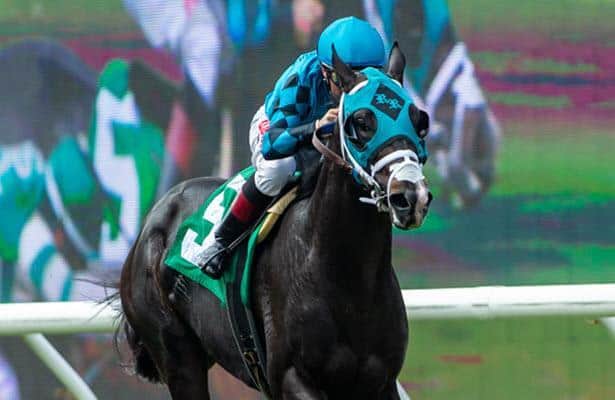 On Feb. 7, things were looking great for Billy Batts. That day, the Steve Asumussen-trained son of City Zip won the Baffle Stakes at Santa Anita Park, his second career win.

Billy Batts hadn’t finished worse than third since July 2019. That all changed at the end of February, when he finished seventh on an undercard race at the Saudi Derby. His next start was at Churchill Downs, where he finished 11th in the War Chant Stakes in May.

The colt returns on Sunday at Prairie Meadows for the $100,000 Iowa Derby, where he will try to get his 2020 campaign back on track. At 3-1, he’ll face off against a field where the current favorite is Shashashakemeup at 2-1.

For Shashashakemeup, the race is an opportunity to get a first career stakes victory. The colt, trained by Keith Desormeaux, finished second and first in his last two starts, both allowance optional claiming races. The son of Shackleford’s last stakes start was in the Risen Star (G2) at Fair Grounds, where he finished 11th.

Also in the field for the Iowa Derby is Hondo Lane, a son of Mr Speaker, who is coming off a victory in an allowance race on June 24 at Canterbury Park.

Another notable race at Prairie Meadows on Sunday is the $100,000 Iowa Oaks (G3). The Oaks will feature another Asmussen-trained 3-year-old looking to start meeting expectations. Strong Flag is the current favorite for the race at 5-2 odds.

The daughter of Strong Mandate was purchased for $435,000, but has a career record of 6: 1-1-1, with the lone victory coming in her third attempt at a maiden special weight race at Oaklawn Park in March. The Iowa Oaks will be her second stakes race after finishing sixth at the Gardenia Stakes at Oaklawn.

Facing off against Strong Mandate will be Dynasty of Her Own. The daughter of Shanghai Bobby is riding a two-race winning streak into Iowa, most recently having won the California Oaks at Golden Gate in May.

Following the Oaks, the $100,000 Cornhusker Handicap (G3) will showcase Sir Anthony, a 5-year old son of Mineshaft and the stakes' reigning winner. Last year’s Cornhusker was the last win for the horse, who most recently finished 7th in the Hal’s Hope Stakes at Gulfstream Park.

Looking to knock off the reigning champion will be 5-2 favorite Night Ops, who will be trying to get his 2020 back on track after finishing 12th in the Oaklawn Handicap (G2) in May. The son of Warrior’s Reward raced at Prairie Meadows in last year’s Iowa Derby, finishing fifth.