Big John B Wins on Dirt in Tokyo City 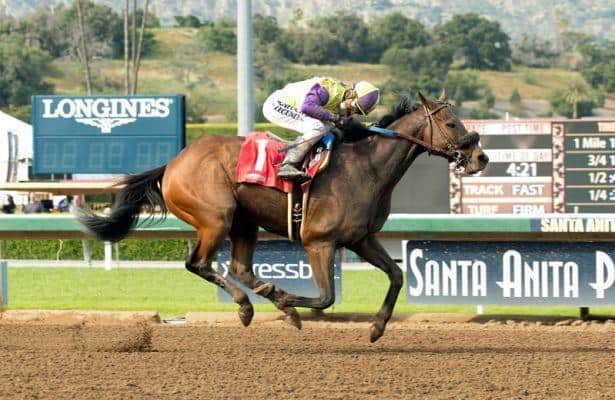 This was a natural “Hat Trick” for D’Amato, winning with his first three starters April 3 to give him a 35-32 lead over Doug O’Neill in the race for leading trainer. Winning owner Michael House resides in El Cajon.

Rafael Bejarano, Big John B, Winner: “This horse has been training so well. I was sad with the way his last two races turned out, but he’s always training well, but the turf wasn’t always to his liking. He doesn’t like soft turf. So, we decided to try the dirt again and thought, ‘why not?’ It was a really exciting win.

“I knew there would only be two or three horses with speed and they tried to go slow but my horse only has one style, he likes to come from behind. I wasn’t panicking. I knew that I had a lot of horse so I was comfortable.”

Victor Espinoza, Class Leader, Second: “It was my first time on him. He ran a big race. He’s a little bit lazy, but he ran great. Big John B ran by us pretty easy but this was a huge improvement for him. It should be better for him going into his next race.”

Phil D'Amato, Big John B, Winner: “I really wasn’t worried (about him being that far back), because when he won that mile and a half on the dirt at Del Mar (Cougar Handicap on July 24), he did the same thing. He just kind of waited to find his stride, slowly moved up on the back side by the half-mile pole.

“To me it was just a matter of whether he was going to get out or not around the turn. Once he finally got him in the clear, he showed him a big kick.”

As for going three up in the race for leading trainer: “I feel good about that, but I never entered this meet knowing I was going to make a run at the training title at all, but believe me, I wouldn’t mind (winning) it now. It’s bringing my whole team together. All my guys love the battle and the camaraderie . . . It’s bringing our team closer and closer together. We’re firing on all cylinders.”