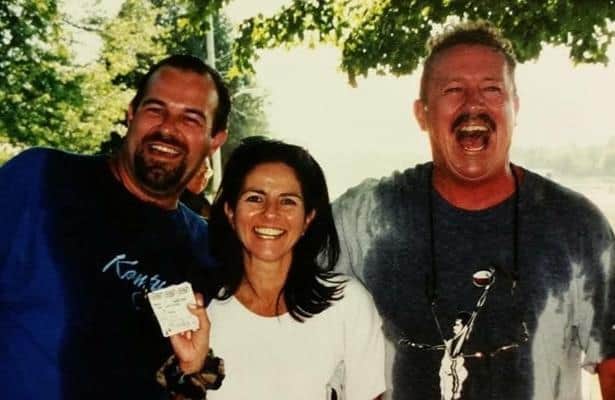 Horse Racing Nation is highlighting readers’ best betting days at the races — how they chased the big score and cashed in — with this weekly feature. Let us know about your big hit here.

What would you do if you became $50,000 richer in a matter of hours? Some would quit their job, others might take a nice vacation.

Like many who work in the horse racing industry, that question was easy for groom Michael Goldsberry. He reported to work bright and early the next day at Saratoga with a big smile on his face.

Goldsberry and his friend Danny had split a $64 Pick 6 that returned $102,000 on Travers Day in August 2001, but he still felt compelled to fulfill his duties.

"The next morning one of my horses that I really liked was breezing, so I said I have to be at work because Pat Day was coming to work him," recalls Goldsberry, shown at left in the photo above.

The Hall of Fame jockey was among those who realized Goldsberry's commitment.

Pat Day found out about his score and told trainer Pete Vestel, for whom Goldsberry was working at the time, "You better hang on to this guy. He's at work after making $100,000. This guy wants to work."

Goldsberry fell in love with racing when cashing his first $5 win bet as a child.

"It was over at that moment. I swallowed the hook," Goldsberry said.

Goldsberry maintained his love for the sport as he grew older, but he decided to start his career in a more lucrative field as an X-ray technician.

He grew restless in his job as the itch to get involved in racing persisted. He left the medical field after 20 years when he answered an advertisement in the paper from Churchill Downs in 1998.

He was hired as a hot walker the next day, and his journey in racing began. Goldsberry travelled to Gulfstream Park that winter for more opportunities.

The first person he met upon arriving was the great Carl Nafzger.

Goldsberry quickly picked up the techniques after being taught by Nafzger's team. He had the joy of caring for many of racing's stars, including Banshee Breeze and Vicar.

"Right place, right time. I was in the Winner's Circle for the Fountain of Youth and Florida Derby after only being in the game for six months."

In 2000, he began working at Saratoga, where he met a fireman from New York named Danny. (Goldsberry doesn't remember Danny's last name.) They became quick friends and talked horses daily.

There was a large Pick 6 carryover on tap on Travers Day, and Goldsberry and Danny decided to split a ticket.

"We had one single and two horses in the other five races," Goldsberry said.

Goldsberry started thinking they had a chance at hitting the Pick 6 when Bill Mott's Dr. Kashnikow came through.

"He was probably the longest shot of the six horses that won that day. He might have been a $20 horse. He came out of the 12 hole on the grass and came and got them right at the end. That was probably the closest finish we had."

Goldsberry and Danny were alive to two horses in the final leg and had no idea the amount of money they were about to cash as it was a far walk to the nearest teller or television monitor.

They were just happy that they had made some money and had a good time throughout the day and were not worried heading into the final race of the sequence.

Pete Vestal's barn was next to a grassy hill, which was even with the five-eighths pole on the backside. The hill became a party spot and the best place to watch races for those on the backstretch on the weekends, especially that Saturday, when more than 60,000 people showed up at Saratoga.

Those watching from the hill could see only bits and pieces of each race, so Goldsberry had to get second-hand accounts of how each race played out.

Goldsberry said as many as 50 people might have been watching with him on the hill with coolers by their side all day long.

"That was the year that Point Given won the Travers, but I missed the race completely because we were tearing it up back there," Goldsberry recalled.

"We were eating and drinking, having a good time and that ticket hits. They poured champagne over Danny and I."

Most people would immediately rush to the IRS window to collect their winnings, but Goldsberry was in no hurry.

Goldsberry did not have a cell phone, so the first thing he did was to head to the Saratoga harness track to call his parents and everyone else he knew on a pay phone to tell them the news.

Danny trusted Goldsberry to hold onto the winning ticket overnight and Goldsberry kept it close as he slept that evening.

"I was living on the backstretch at the time in one of the dorms, so I put it under my pillow overnight. I slept on it all night and cashed it the next morning."

Goldsberry said he stayed a motel room for the rest of the meet, paid cash for a new pickup truck and picked out a laptop and cell phone.

"Needless to say, it changed my life. It was a day I'll never forget"

Goldsberry remained in racing for another 10 years before retiring in 2011.

"Working on the racetrack is the best job I've ever had," he said.

Goldsberry still enjoys playing the Pick 6 and says he has hit two since his big score, including one for $16,000 in 2006.

Perhaps he'll invest in a safe to store any future winning tickets so he does not have to sleep on them.