Big Handsome cuts back in distance in Allied Forces 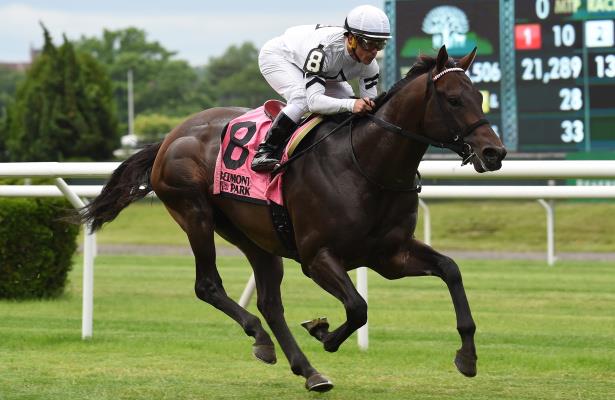 Photo: NYRA/Chelsea Durand
Returning to make his first start following a third-place finish in the Grade 2 National Museum of Racing Hall of Fame at Saratoga Race Course on August 4, Team D, Head of Plains Partners, and ERJ Racing's Big Handsome will headline a field of nine in the $100,000 Allied Forces for 3-year-olds going six furlongs on the turf on Sunday at Belmont Park.
A Street Boss colt under the care of trainer Tony Dutrow, Big Handsome was purchased for $250,000 at the Fasig-Tipton October sale as a yearling. After making his first three career starts on the dirt, he broke his maiden in his fourth career start and first on the turf besting a field of six last February at Gulfstream Park. Taking back-to-back races including the Paradise Creek in his next two starts, Big Handsome was stretched out to the mile distance for the Manila at Belmont in which he finished second by a neck before running in the Hall of Fame at 1 1/16 miles. Cutting back for the Allied Forces, Dutrow expects the one-turn distance to be most beneficial for him.
"He's been doing exceptionally since coming out of the Hall of Fame," said Dutrow. "We decided to enter here because I feel he's most effective at one-turn. He gave a very game effort in his last, however facing the top horses in his peer group, I think he's better going one-turn and Javier [Castellano] seems to get along with him well so if he runs his race he should be very competitive."
Drawing post 7 and made the 7-5 morning line favorite, Big Handsome will once again be ridden by Hall of Famer Javier Castellano.
Set to make his first stakes start for trainer Christophe Clement is White Flag. A home-bred son of War Front for owner Robert Evans, White Flag has two wins from five starts with a pair of third-place finishes. Breaking his maiden in his fourth career start at Belmont, he followed to take an allowance race on July 16.
The 3-1 morning line second choice, White Flag will leave from post 6 with Joel Rosario in the irons.
Making his turf debut for trainer Todd Pletcher and owners Michael Tabor, Susan Magnier, Derrick Smith and Stonestreet Stables is Fact Finding. Sired by multiple graded stakes winner The Factor, Fact Finding won his debut at Saratoga as a 2-year-old before going on to take an allowance race at Keeneland in October and the Smooth Air at Gulfstream in December. In his 3-year-old debut in the Grade 3 Sam F. Davis at Tampa Bay Downs, he finished fifth.
With Hall of Famer John Velazquez aboard, Fact Finding will leave from post 3.

Rounding out the field is Hardened for owner and trainer David Cannizo and Secure Investments who enters after breaking his maiden in his second start and first on the turf at Saratoga on August 4; Harlan's Harmony for Curragh Stables and trainer John Terranova; The Money Monster for Hall of Famer Bill Mott and R.A. Hill Stable and BlackRidge Stable; Proforma for trainer Michael Stidham and Darrc Inc. and Jewel Heist for trainer John Kimmel and owner Tobey Morton. Toga Challenger is a main track only entrant for trainer Rudy Rodriguez and owners Michael Dubb and David Simon.