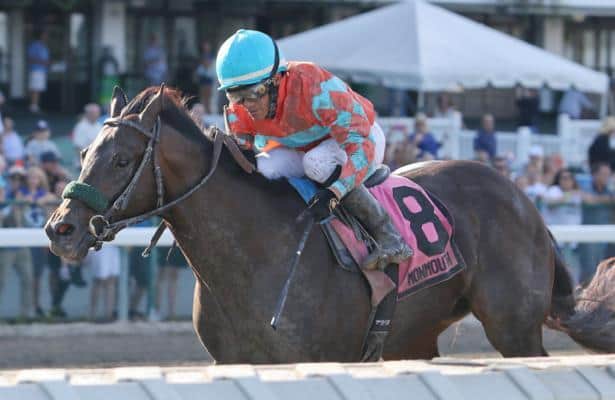 Contested at about 1 1/16 miles, the Private Terms is second of three Laurel preps for sophomores on the way to the $1.5 million Preakness Stakes (G1), the middle jewel of the Triple Crown, May 16 at Pimlico Race Course.

Colts Neck Stables’ Big City Bob won the one-mile Sapling at Monmouth Park in September prior to his show finish behind top Triple Crown prospect Tiz the Law in the Champagne. Trained by Jorge Duarte Jr., the Shanghai Bobby colt has been prepping for his return at Palm Meadows, Gulfstream Park’s satellite training facility.

Euro Stable’s Lebda, from the barn of Laurel Park's winter meet-leading trainer Claudio Gonzalez, was a front-running winner of the one-mile Miracle Wood on Feb. 15, opening a seven-length lead at the top of the stretch and holding on for a three-quarter-length triumph over Mine Not Mine. Lebda was third in a pair of juvenile stakes last year, the Iroquois (G3) and Heft, the latter Dec. 28 at Laurel.

Romanoff, Amen Corner and Dreams Untold followed Lebda and Mine Not Mine past the wire in the Miracle Wood. Heavily favored off a monster maiden win, Dreams Untold was unruly in the gate and stumbled badly at the start, then made a powerful move up to second before flattening out.

• Montauk Traffic, a winner of two straight, including the Jimmy Winkfield on Feb. 8 at Aqueduct;

Supporting the Private Terms on the March 14 program are a trio of $100,000 stakes – the one-mile Beyond the Wire for 3-year-old fillies, one-mile Nellie Morse for fillies and mares 4 and older and 1 1/8-mile Harrison E. Johnson Memorial for 4-year-olds and up.

The Beyond the Wire is the second of three Laurel preps for sophomore fillies heading toward the $250,000 Black-Eyed Susan (G2) May 15 at Pimlico.

Naughty Thoughts, Princess Cadey and She’smysunshine, the top three finishers from the seven-furlong Wide Country on Feb. 15 at Laurel, top nominations to the Beyond the Wire. Rafael Lopez’s Naughty Thoughts gave trainer Jonathan Maldonado his first career stakes win in the Wide Country, which also saw Bella Aurora run fifth as the favorite after a troubled start and return as a nominee to the Beyond the Wire.