Bezos is entered for debut on Sunday at Santa Anita 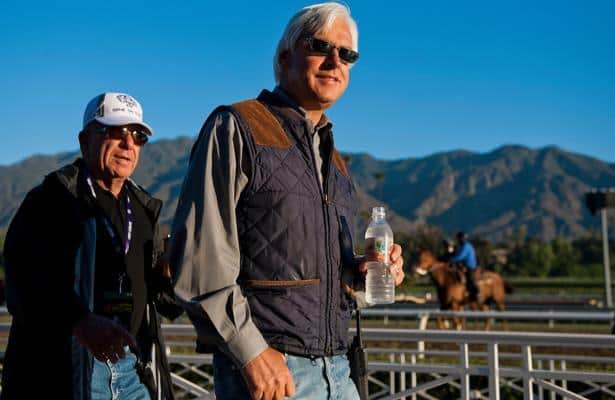 Bezos will make his highly anticipated debut for trainer Bob Baffert in Sunday's fifth race at Santa Anita Park, a loaded 6 1/2-furlong maiden race for 3-year-olds that drew a field of nine.

By Empire Maker out of the A.P. Indy mare A P Mink, Bezos will break from post 5 under Hall of Famer Mike Smith. The colt – who bettors installed at 26-1 in Pool 2 of the Kentucky Derby Future Wager – has been working steadily since early December. He heightened the training buzz Monday when drilling five furlongs in a sharp 58.8 seconds at Santa Anita Park.

Bezos was a $400,000 auction purchase at the 2019 Keeneland September yearling sale and is campaigned by SF Racing, Starlight Racing and Madaket Stable. With just three months until the Kentucky Derby, Bezos will have little room for error if he is to make the 20-stall starting gate on May 1. It would not be unprecedented, however. In 2018, Justify did not debut until Feb. 18 and promptly reeled off three straight wins to qualify for the Kentucky Derby. He would go on to sweep the Triple Crown and retire undefeated.

Bezos, who in Las Vegas is trading at no longer than 15-1 in Kentucky Derby futures, does not figure to have it easy Sunday as several other promising colts signed up. Among those is Mr. Impossible, who was second to highly-regarded Concert Tour in his Jan. 15 bow for trainer Simon Callaghan. The son of Munnings was also entered in Saturday's seven-furlong San Vicente (G2) but has been scratched for this spot.

The field in post-position order with jockeys: