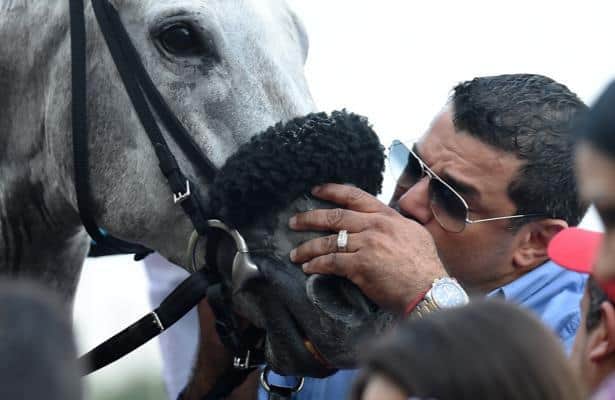 The indictments handed down Monday against 27 figures in racing, including trainers Jason Servis and Jorge Navarro, came as no surprise to Andy Beyer.

The author, journalist and speed figure pioneer aired some strong opinions in an interview with Steve Byk, host of the “At the Races” radio show, saying Tuesday that federal investigators' findings “help confirm what horseplayers have already known for decades: that the use of illegal drugs in racing is the major problem in the game, and it’s pervasive, and that the industry on its own hasn’t done anything to combat it.”

Beyer told Byk that over the years, there has been a succession of trainers “who perform feats that just defy all common sense.” And he thinks the supervision of racing at Gulfstream Park, where both Servis and Navarro were common names in the entry box, “has probably been consistently weak.”

“Even before what happened [Monday],” Beyer said, “if you had talked to any horseplayer at Gulfstream who’s paying attention to what’s going on and said, ‘Is anybody obviously cheating here?’ they would take two seconds to say, ‘Well, yeah, Navarro and Servis.’ And many of them would give you a third name which I won’t mention because it wasn’t part of the indictments. But everybody recognized that Navarrao and Servis had some kind of an edge that didn’t make sense.”

Beyer said he can get a sense of who might be cheating by looking at statistics.

“I’ve always thought that a trainer who can win 20 percent of the time is a really outstanding trainer,” he said. “And if you look at current guys who are active now and are in the hall of fame, Steve Asmussen is like a 20 percent winning trainer. Bill Mott, 21 percent for his career. Bob Baffert a little over that.

"Over the last five years, Jorge Navarro has won with 29 percent of his starters; Jason Servis 28 percent. You mean these guys just came from nowhere and they’re better than Bill Mott and Steve Asmussen? I don’t believe it.

“The statistic for me that is even more revealing … is a trainer’s winning percentage the first time off a claim. When one trainer can consistently improve on horses – like not over a long period of time, but overnight, or in the first start since claiming – when they do that consistently, it certainly raises my eyebrows.

"Navarro over the last five years has won 24 percent first time off the claim. Jason Servis has won 35 percent in his first starts after a claim. That’s impossible.”

Beyer argued that the stakeholders in racing don’t want a level playing field.

“The people running racetracks just didn’t want to rock the boat," he told Byk. "Stewards didn’t want to rock the boat and have a big scandal on their hands. Owners flock to these trainers who have the worst reputations. Do you think (owners) Gary and Mary West were regretting the lack of a level playing field when Maximum Security won a $20 million race two weeks ago?

“There has really been no great emphasis within the industry to try to clean up an issue which I think all the customers recognize is problem No. 1.”

Beyer said he was surprised by the scope of the allegations.

"Maybe I was just naïve," he said, "but when I saw a trainer who was working miracles on a daily basis, I always assumed that maybe a guy like Navarro was ... an unscrupulous trainer trying to take an edge, and he had a vet who was also ready to take an edge, and so the trainer and the vet were working together and they were cheating.

"Well, that was such a simplistic view. When you read the indictment ... this was a major criminal conspiracy. This wasn’t just a couple of scuffling racetrackers, trying to do something illegal."

And there was another aspect of the scandal, Beyer said, “that really stunned me.”

“Watching the races in Florida and the other places they compete, wouldn’t you have thought that Navarro and Servis were arch rivals?" he asked.

RELATED: Records show trainers were in on cheating together

Outside of the Florida circuit, both conditioners spend their summers at Monmouth Park in New Jersey.

"Instead, they were partners in crime," Beyer said. "Navarro would ask Servis, ‘Can you get me this drug?’ Servis would tell Navarro, ‘Boy, I’m giving my SGF-1000 to all my horses. It’s doing great.’ One of them would text the other to warn him when there was a racing official on the grounds in the area where they hid all their illegal drugs. They were partners in crime.

“If the two big trainers at a track, who win all the races anyway, are working together, what chance do you or I or the average horseplayer have to beat that corrupt game? That shocked me more than anything."