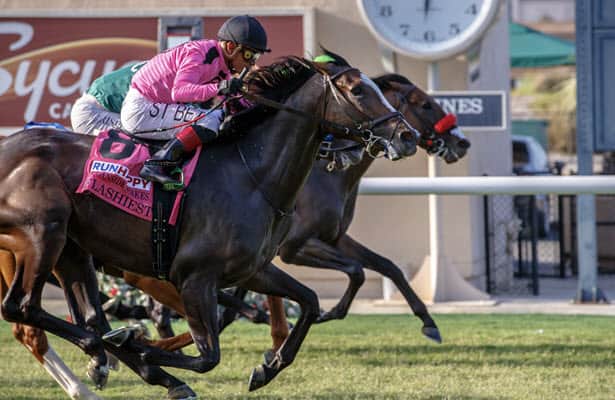 A Del Mar summer season that by all accounts has been highly successful comes to a close with a five-day race week beginning Thursday.

On Saturday, the card is headlined by the $200,000 John C. Mabee (G2) for older fillies and mares and the $250,000 Del Mar Derby (G2) on turf, which will feature an intriguing matchup between the winner of opening day’s Oceanside Stakes (Flashiest) and the top three finishers from an eventful La Jolla Stakes (G3) on Aug. 8.

Trained by Leonard Powell, Flashiest served notice when taking the one-mile Oceanside in a blanket finish on July 16 in only his fourth start and first in a stakes.

Buoyed by the win, his connections ambitiously shipped the Mizzen Mast colt cross-country for a try in the $1 million Saratoga Derby (G1) three weeks later. He finished dead last.

Powell told Horse Racing Nation that Flashiest “was riled up” before that race at Saratoga and was unable to relax, prompting the disappointing finish. The 1 1/8-mile Del Mar Derby, which drew a full field of 14, will be his third start in seven weeks.

“He’s doing very well,” Powell said. “He came back from New York three days after running there and it took him about a week to get back to his normal weight. But as soon as he resumed normal training he hasn’t missed a day and has been very forward.

“Three starts in seven weeks, I’m not really concerned about it,” Powell added. “Our big concern is we shipped cross-country in the middle of that. That would be the slight concern. But I have schooled him a couple times in the paddock here at Del Mar, and he handled it very well. He hasn’t given me any signs that this is one race too many.”

Flashiest will break from the far outside in post 14 under Abel Cedillo, who was aboard in the Oceanside.

Also from the Oceanside are runner-up Crew Dragon, No Foolery Here and Hockey Dad. They all finished within a half-length of Flashiest in that encounter. Crew Dragon would come back to beat Hockey Dad by a head in a one-mile allowance at Del Mar on Aug. 12.

Last month’s La Jolla (G3), the second leg of Del Mar’s 3-year-old turf stakes series, was equally as competitive as the Oceanside. Sword Zorro finished a nose in front of European import Zoffarelli, with another head back to Hudson Ridge. But Sword Zorro was ruled to have caused interference when veering out in deep stretch and was disqualified and placed third.

Zoffarelli's win came only eight days after arriving from England for trainer Jeff Mullins and owners Red Baron’s Barn and Rancho Temescal. In seven starts across the pond for trainer Ralph Beckett, the Irish-bred Zoffany gelding had a win with five seconds. He has worked once since the La Jolla.

“He’s been doing good,” Mullins told HRN this week. “He was here only eight days when we ran him the first time, so we gave him plenty of time after that race. We gave him one good five-eighths over the track, and that’s probably all he’s going to need.”

Mullins added that going into the La Jolla, he was not sure what to expect from Zoffarelli.

“We didn’t really know too much about him, and you never know how they’re going to take to the American style of racing,” Mullins said. “So we were pleased. The trainer that had him previously said he’s a very game horse and loves to fight. He showed that.”

Zoffarelli drew post 9 and will again be ridden by Drayden Van Dyke.

The new shooters in the Del Mar Derby that appear in with a chance include Barraza, who was beaten just a neck when third in the Crew Dragon-Hockey Dad allowance race; and Jimmy Blue Jeans, who exits a July 17 allowance win over Del Mar Derby contender Lincoln Hawk.