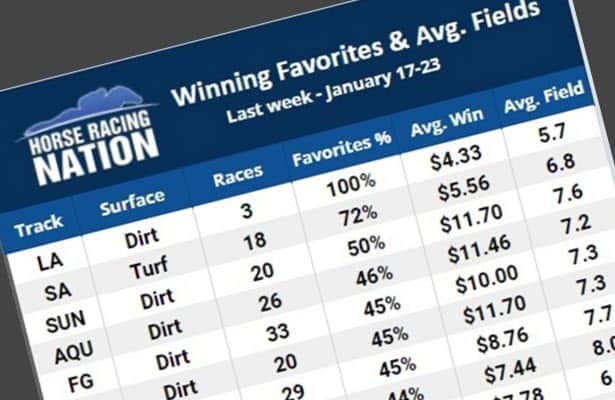 For three weeks running to start 2022, the number of winning favorites has remained about the same at 38 percent. Other fairly consistent factors the week of Jan. 17-23 included field size and average win payout in comparison to the first two weeks of the year. Total races run this week decreased by 15 as winter weather and cold temperatures continue to take a toll on viable live racing days.

One place that bucked the consistency was Aqueduct, where favorites had been winning at less than 25 percent consistently through the first two weeks. That changed dramatically to 46 percent. A biased rail made a major impact on the way races were ridden as well as the way handicappers approached their wagers.

“Many pre-formed opinions about the races have to be discarded as players seek to re-evaluate races and adapt to the bias,” said New York Racing Association morning line maker and TimeformUS handicapper David Aragona. “What tends to happen is that there’s an adjustment period for both bettors and jockeys in which everyone is struggling to adapt to the new uneven playing field.

“We saw that adjustment taking place on Saturday at Aqueduct when many riders didn’t appear to be aware of the strong rail bias, allowing seemingly inferior horses to win, thus generating some large mutuel payouts. By Sunday, both players and jockeys had better adapted to the situation. This resulted in a parade of winning favorites on a card that had looked pretty formful prior to the bias taking hold," he said.

Some horseplayers may feel frustrated when having to consider another variable in their handicapping. Others may view a track bias as an exciting financial opportunity. Aragona offers the latter perspective.

“When a bias persists over a period of days or weeks, the races tend to become more predictable for bettors, and we’re seeing that happen at Aqueduct,” he said. “I try to observe the trends on these days and make quality notes about trips so that I can highlight compromised horses to bet back in the future. Personally, I think that’s where the true value lies in the wake of a track bias.”