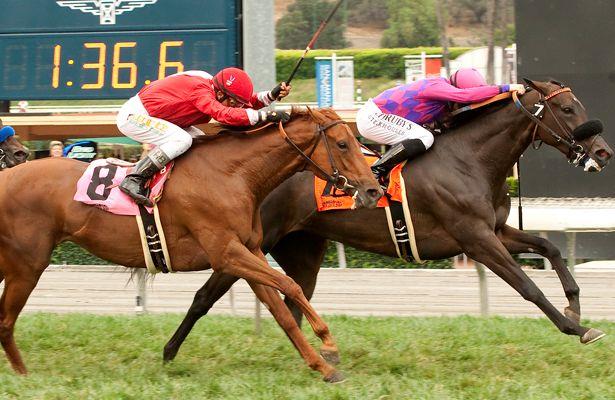 Photo: Benoit Photo
A better post position and a softer pace scenario could benefit Fanticola in Monday’s Memorial Day feature, the Grade I, $300,000 Gamely Stakes for fillies and mares, three and up, at 1 1/8 miles on turf.
Fanticola, a six-year-old mare conditoned by training leader Phil D’Amato, broke from the extreme outside 14 post last out in the Royal Heroine at a mile on grass, compromising her chances of making the lead from the start under regular rider Joe Talamo.
“There was nothing Joe could do,” D’Amato said. “He rode as good a race as he could being hung that wide, but he should be able to save a little bit more ground this time, and it’s her third race off the bench, so all systems are go.”
Despite her unfavorable post in the Royal Heroine, Fanticola held the lead into the stretch but was passed late, winding up third, beaten less than two lengths.
The Canadian-bred daughter of Silent Name has a 5-5-8 record from 21 starts with earnings of $537,300 for owners Anthony Fanticola and Joseph Scardino.
The lineup for the Gamely, race eight of 10: Nancy From Nairobi, Abel Lozano, 5-2; Evo Campo, Rafael Bejarano, 15-1; Dressed to a T, Mario Gutierrez, 30-1; Fanticola, Joe Talamo, 6-1; Elektrum, Victor Espinoza, 6-1; Wekeela, Javier Castellano, 9-5; Keri Belle, Mike Smith, 15-1; Illuminant, Flavien Prat, 5-1; and Nashoba’s Gold, Tyler Baze, 15-1.
MALDONADO ENJOYS HOLIDAY ON TWO-YEAR-OLDS
Meet Edwin Maldonado, King of the Two-Year-Olds.
The 33-year-old native of Columbus, Ohio, who is represented by agent J.R. Pegram, is in a pitched battle for Santa Anita’s Winter Meet riding title, thanks in the main to his remarkable success on two-year-olds.
From nine mounts aboard “babies” this year, Maldonado has won seven, twice at Los Alamitos and five times at Santa Anita, including Saturday when he piloted Cioppino Pasadino to a 4 ¼-length score for trainer Gary Sherlock in the second race at an $18.40 win payoff.
“He’s number one among 269 jockeys in two-year-old earnings this year with $241,645,” pointed out Pegram, “and he’s also first in wins on two-year-olds.”
”I like being on younger horses,” said Maldonado, a refreshing presence in the Southern California riding colony. “It’s exciting. It’s like opening a Christmas present. You don’t know what you have until they run.
“Riding good horses for trainers like (Mike) Harrington and (John) Brocklebank who always seems to do well with babies make it easier for me, and it helps to have a little luck at the break.
“I got a off to a good start this meet. The last time that happened, at Hollywood Park, I won the title, so based on that, I think I have a good shot to win it here.
“In past meets, it seemed I got off to slow starts and had to finish strong to catch up. Now I’m in a better position, up front with others trying to catch me.”

FINISH LINES: Obviously, in quest of his third straight win in the Grade I, $400,000 “Win and You’re In” Shoemaker Mile next Saturday, June 4, worked six furlongs on Santa Anita’s training track Sunday for Phil D’Amato in 1:10.60. Fractional times for the eight-year-old Irish-bred gelding were 23.20, 34.80 and 45.60. Probable for the Shoemaker: Heart to Heart, Julien Leparoux; Home Run Kitten, Joe Talamo; Midnight Storm, Rafael Bejarano; Obviously, Mike Smith; Tourist, Jose Lezcano; and Twentytwentyvision, Flavien Prat . . . Leandro Mora, assistant to Doug O’Neill, reports continued good news on Kentucky Derby winner Nyquist, currently at Pimlico following his third-place finish behind Exaggerator in last Saturday’s Preakness. “The last two days his white count has been normal, he’s eating, and his temperature is back to normal,” Mora said Sunday morning at Santa Anita. “If everything stays as it is, he’ll be here on June 5.” . . . With three wins Saturday, Flavien Prat moved into first place in the jockeys’ race with 16, one in front of Tyler Baze, Rafael Bejarano and Edwin Maldonado, who have 15 . . . Unusual Heat, the indefatigable 26-year-old stallion that stands at Harris Ranch in Coalinga for $20,000, sired three winners on yesterday’s Gold Rush Day card for California-bred or sired horses at Santa Anita: How Unusual (3.60) in the third race; Infinite Loop ($7.80) in the seventh; and Packin Heat ($30.40) in the ninth, the latter cementing a Pick 6 carryover into Sunday of $103,276.50. For good measure, Unusual Heat also sired three horses that finished third . . . Hall of Fame jockey Alex Solis reflecting on icons Charles Whittingham and Bill Shoemaker, each with a stakes race named in their memory at Santa Anita: “They were two great people, two great horsemen and I’m very lucky to have ridden with Shoemaker and ridden for Mr. Whittingham. It was a great learning experience and I enjoyed many great times with each of them.” Solis pilots Blingo for trainer John Shirreffs in today’s Whittingham Stakes. “He’s a nice horse and he’s training very well,” Solis said. “He’s very happy right now. I think he’s coming up to this race in good form.” . . . Congratulations to jockey Brice Blanc on winning his first race of the meet Saturday aboard Bert’s Melody for trainer Sean McCarthy in the Fran’s Valentine Stakes. “It’s been a little rough,” said the affable Frenchman. “I’ve gotten beat a couple of noses, so it was nice to win, especially for John Barr (Oakcrest Stable) and Sean.” . . . Kona Gold winner Wild Dude worked four furlongs Sunday for Jerry Hollendorfer in 49.20 with Bejarano up . . . Maiden Trojan Nation, runner-up by a head in the Wood Memorial and 16th at 42-1 in the Kentucky Derby, worked five furlongs Sunday in 1:00.20, after which trainer Paddy Gallagher said he was “still thinking” about the son of Street Cry’s next race . . . Trainer Hector Palma feted Victor Espinoza and Fernando Perez on the occasion of their birthdays Sunday morning at Clockers’ Corner, balloons and all. Espinoza turned 44 on May 23, while Perez was 30 on May 25 . . . Agent Vic Lipton is representing seven-pound apprentice rider Jose Barnes . . . Horseplayer Dylan Donnelly will be Tom Quigley’s guest Monday, 12:50 p.m., in the East Paddock Gardens . . . Santa Anita races through this Monday, Memorial Day, which is Dollar Day when fans can enjoy draft beers, hot dogs and sodas for just a buck. First post time Memorial Day is 2 p.m. Admission gates open at 11:30 a.m. Santa Anita’s festive Infield Carnival continues through Monday from 12 noon until 7:30 p.m. The entire family can share Carnival rides, games and prizes in addition to exciting Thoroughbred racing . . . Golden Gate’s ‘Golden 6,’ alive and growing for 51 straight days, stands at a whopping $1,065,284 going into Sunday . . . Friday’s single winning Pick 6 at Santa Anita that paid $167,245 was purchased through BetAmerica for $1,280.