Bet these Breeders' Cup Saturday runners next time out 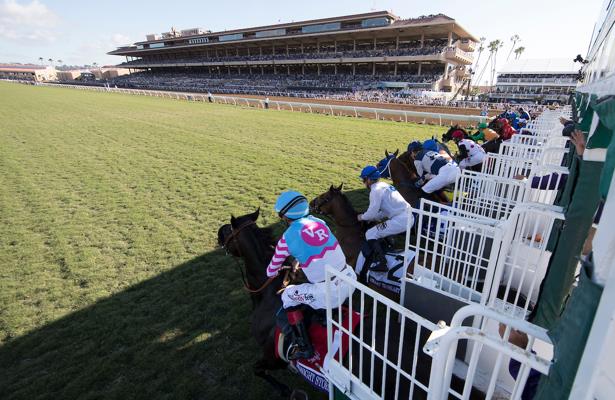 This is part two of a series designed to find values on 2017 Breeders' Cup runners heading into their next starts. Part one covered Friday's races at Del Mar, with this an analysis of Saturday's runners.

This was not a Breeders’ Cup event, but Count Alexander had a brutal trip and is definitely going on my watch list. In this five-furlong turf sprint, Count Alexander seemed to have plenty of run turning for home under Corey Nakatani but was stuck inside with nowhere to go. He ended up 11th but could have easily finished in the top three with a different trip.

This did not appear to be a strong renewal of this event, and the final time was mediocre. The pace was honest and Caledonia Road rallied from post twelve to post an easy score at 17-1 odds under Mike Smith. Alluring Star did all of the pace dirty work, pulled clear in the lane, and just held 2nd in a decent effort. Blonde Bomber rallied from 13th to land the show. Separationofpowers was wide and prominent throughout after a bit of a slow start from the outside post and ended up an okay 4th. Wonder Gadot did not have the smoothest stretch run and was not disgraced in 6th. Post time favorite Moonshine Memories dueled and retreated to 7th.

The Turf Sprint is always one of the toughest handicapping puzzles, and this year was no exception. Strong favorite Lady Aurelia (fading 10th) looked like the paper race winner but was going nowhere fast under John Velazquez as 30-1 outsider Stormy Liberal won the mad dash to the finish over stablemate Richard’s Boy. Peter Miller saddled the 1-2 finishers and Joel Rosario was aboard the winner, who was an exceptional turf sprinter on the downhill course at Santa Anita earlier this year. Disco Partner was 11th after three furlongs and ran out of ground in a decent show finish. They could run this race 100 times and have a different outcome each time.

In one of the biggest upsets in Breeders’ Cup history, Bar of Gold ($135.40) got up in the final jump to nip all-weather specialist Ami’s Mesa with Carina Mia another length back in 3rd. Former claimer Skye Diamonds was not disgraced in an even 4th-place finish from post 12. Princess Karen was another head back in 5th at 87-1, followed by Paulassilverlining, beaten favorite Unique Bella, defending champ Finest City and Finley’sluckycharm. The big disappointment in this race was Unique Bella. The 3-year-old filly set lively fractions and gave way once headed.

Wuheida originally shipped to the states for Keeneland’s QEII Challenge Cup in October but was forced to scratch after bruising her hoof. She was redirected to Del Mar and was more than up to the challenge in a sharp stalk and pounce one-length victory over Rhododendron. Del Mar turf specialist Cambodia held off Dacita for the show and defending champ Queen’s Trust was another nose back in 5th. It was a tough race for trainer Chad Brown. Post time favorite Lady Eli (7th-place finish) suffered cuts and lacerations to both hind legs and threw a shoe in her first off the board finish ever. Another Brown entrant, Grand Jete, was bumped and steadied early, losing valuable tactical position, and was never able to get going in a troubled 9th place finish. She is worth following.

Finally, a Saturday BC winner for me. My best bet, Roy H, sat the right outside tactical trip and beat Imperial Hint by a measured length under Kent Desormeaux. This was the second Cup winner on the day for trainer Peter Miller and Roy H’s fifth win from six starts this year, with his lone setback a troubled 2nd in the Grade 1 Bing Crosby July 29. Mind Your Biscuits rallied from last to land the show. He did the same thing in 2016. Another favorite bit the dust in this event. Drefong did not get out of the gate quickly from post position two and his race was over before it started for Bob Baffert.

When a sharp, classy horse lands an advantageous post and sits a comfortable forwardly placed trip, the rest are in deep water, and that is exactly what happened in the Mile. World Approval made it three Grade 1 wins from as many flat mile turf starts and John Velazquez was aboard for Mark Casse. It was a mad scramble for the minor awards with six horses lunging at the line. Lancaster Bomber just held the place over a fast-closing Blackjackcat. The latter was 12th after a half-mile from unlucky post 13, raced wide throughout, and Kent Desormeaux dropped the whip. He might have made things interesting with a different journey and he goes on my watch list.

This race was a tale of two trips. On one end of the spectrum, impressive winner Good Magic fell into a perfect stalking trip from a middle post and drew away quickly once hitting the front. The hard luck award goes to beaten chalk Bolt d’Oro, and he obviously goes on the watch list after this very wide trip. Breaking from post 11 in the field of 12, he was out in the parking lot around the first turn and remained wide throughout under Corey Nakatani. Despite covering what seemed like the distance of the Kentucky Derby, he kept plugging away and missed 2nd by a length. Solomini, a distant 2nd to Bolt d’Oro in the Grade 2 FrontRunner, reversed decisions with that rival in this spot. The top three were more than eight lengths clear of the rest are all promising 2-year-olds with nice pedigrees. Hopefully they all stay healthy and continue to develop.

After the defection of Ulysses, the players jumped all over defending champ Highland Reel, but he had to take a back seat to fellow overseas shipper Talismanic. The latter stalked from the inside post and outfinished Beach Patrol and aforementioned favorite Highland Reel. Sadler’s Joy got going much too late and plugged along for 4th. Talismanic is trained by Andre Fabre, and I will never forget his huge Breeders' Cup Classic bomber Arcangues in 1993.

The much anticipated stretch battle between Arrogate and Gun Runner never materialized. Instead, the latter seized control early through honest splits, with Collected in hot pursuit. Gun Runner did not have much luck at 10 furlongs prior to this race but he kept on going and never let Collected pass him. The top two ran 1-2 all the way around with West Coast sitting right behind them from the outset. He was never able to make a dent and held off War Story for the show. Arrogate ended up in a dead heat for 5th with Gunnevera, finishing his career with three straight losses. He was never the same since returning from his scintillating victory over Gun Runner in the Dubai World Cup in March. It is so difficult to maintain top form for a long period of time and seeing the once mighty Arrogate struggle makes me appreciate horses like Zenyatta even more. The top three finishers might meet again early next year in the Pegasus World Cup.