Bet these 2017 Breeders' Cup Friday runners next time out 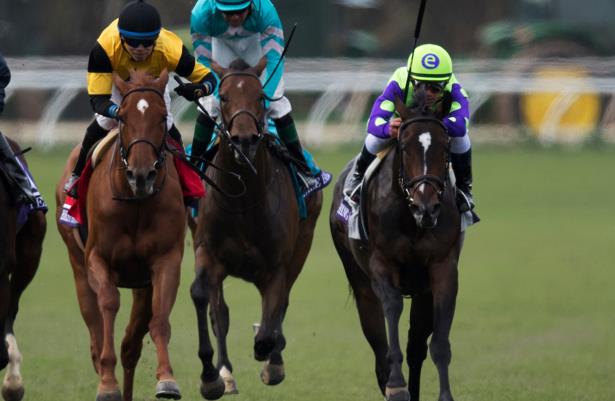 Breeders’ Cup 2017 is in the books, and following an exciting two days at Del Mar, let's try to find some horses moving forward out of the championships for future wagering opportunities.

I think the best horse won the first Breeders’ Cup 2017 race. Rushing Fall showed a nice late kick in her first two turf outings, including Keeneland's Grade 3 Jessamine, and she did it again in this spot at Del Mar for Javier Castellano and Chad Brown. Best Performance and September rallied for second and third.

The horse I am most interested in going forward is 4th-place finisher Significant Form (also trained by Brown) -- and not just because she was my value top choice. She was the only forwardly placed runner to be around at the end. The top three, and 5th through 8th place finishers, were 9th, 8th, 14th, 11th, 7th, 10th, and 13th after the opening quarter. In the early stages, Significant Form was stalking three-wide in 4th. She hung in there throughout in a solid effort and is definitely worth following. She crossed the line first (placed 7th via disqualification Aug. 27) in her initial two Belmont starts including a sharp victory in the Grade 3 Miss Grillo.

I tabbed 14-1 winner Battle of Midway on top because of his romping flat mile Del Mar victory in the Shared Belief Stakes over the summer and his strong overall record in Southern California. He was also an improving 3-year-old with early/pressing versatility.

Sharp Azteca did all of the pace dirty work and was clearly second best. He excels in one-turn mile races. Extended sprint specialist Awesome Slew held off one-turn specialist Practical Joke for the show. Bob Baffert had to be very disappointed with his highly regarded entrants Mor Spirit (8th) and Cupid (10th), and Del Mar lover Accelerate for John Sadler never fired and ended up 9th. I like the top three finishers in this race going forward.

Battle of Midway could be a factor at a number of distances like the upcoming Grade 1 Malibu at seven panels at Santa Anita in December. Earlier this year, he was 2nd in the Santa Anita Derby, 3rd in the Kentucky Derby, and 1st in the Affirmed Stakes.

As stated above, Sharp Azteca is especially dangerous in flat mile races around one turn and a race like the Cigar Mile at Aqueduct on Dec. 2 could be on his radar screen.

Awesome Slew will be a stretch factor in any seven-furlong race on the main track, and the Cigar Mile would be a logical spot for him as well, as he Churchill's Grade 3 Ack Ack in September at 8 furlongs.

My strong Breeders’ Cup Friday handicapping continued with Mendelssohn in the Juvenile Turf. He added blinkers in the Grade 1 Dewhurst Stakes, and the $3 million purchase continued his upward trajectory at Del Mar.

Untamed Domain is a quality late-running turf router for Graham Motion and he rallied from 13th to land the place. He is bred to run all day and I am looking forward to seeing him develop next year.

Voting Control was 3rd for Chad Brown and he is another talented stretch runner in turf routes. He will likely spend his winter in South Florida.

Catholic Boy saved ground and ended up a respectable 4th. He won his first two turf starts for high-percentage, low-profile trainer Jonathan Thomas including a victory in the Grade 3 With Anticipation (Untamed Domain 3rd that day). Watch for him to make some noise at Gulfstream Park over the winter.

Forever Unbridled has not finished out of the trifecta since November 2015 and she kept her perfect 2017 record intact with a gritty half-length victory over likely 3-year-old champion Abel Tasman. The top two finishers rallied from the back of the pack and overtook pace presser Paradise Woods. The latter loves Santa Anita and should be an early/pressing force in stakes routes when racing resumes at that venue in December.

This was my most disappointing Friday result. I expected Elate to continue her late season push for the 3-year-old filly Eclipse Award and the improving, razor sharp filly was training well but ended up a flat 4th. Looking back, three of her four big wins were in New York, and that might be where she shines.

Forever Unbridled is expected to target the Pegasus World Cup against the males. She will need to run much faster to be competitive against the likes of Gun Runner, Collected, and West Coast

Lunsford looks to 'enjoy the ride' ahead of first Kentucky Derby
Bruce Lunsford has done a lot of things during his...

Math Wizard out to show he's more than a one-race wonder
Math Wizard shocked the racing world when he regis...