Bernardini, 18, euthanized due to complications from laminitis 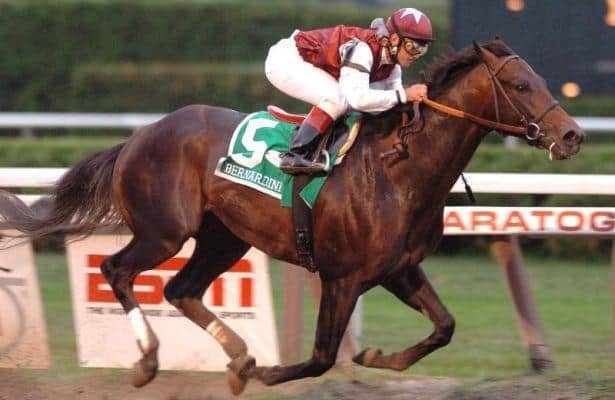 Preakness winner and Eclipse Champion Bernardini has been euthanized at Jonabell Farm due to complications from laminitis.

Trained by Tom Albertrani, the son of A.P. Indy broke his maiden in his second start at Gulfstream Park in March by almost eight lengths before capturing the Grade 3 Withers at Aqueduct in April. He then won in the Preakness Stakes, giving Sheikh Mohammed his first victory in an American Triple Crown race.

Later that summer, he easily won the Jim Dandy (G2) and Travers Stakes (G1) by nine and seven lengths at Saratoga, before a dominant 6¾-length victory in the Jockey Club Gold Cup (G1) against older horses at Belmont Park, earning a career-best 117 Beyer Speed Figure. He finished his career with a runner-up finish to Invasor in the Breeders’ Cup Classic at Churchill Downs. Bernardini was piloted in all his stakes wins by jockey Javier Castellano.

Bernardini retired to stud at Jonabell Farm for the 2007 breeding season as one of the most highly anticipated stallion prospects in recent memory. He did not disappoint. He sired no fewer than four Grade 1 winners in his first crop: Travers and Cigar Mile winner Stay Thirsty, Woodward and Cigar Mile winner To Honor and Serve, Frizette winner A Z Warrior and Italian Gran Criterium winner Biondetti.

In recent years, Bernardini has been making a name for himself as one of the best broodmare sires in the history of the breed. In May 2021, he became the youngest stallion ever to reach 50 black type winners as a broodmare sire. Bernardini currently has 54 black type winners, 32 graded stakes winners, and 11 Grade 1 winners as a maternal grandsire, including Maxfield, Catholic Boy, Serengeti Empress, Dunbar Road, Colonel Liam, and Paris Lights.

Bernardini was cared for during his 15-year tenure at Jonabell by his longtime groom, Philip Hampton.

Michael Banahan, director of farm operations for Godolphin USA, said, “Bernardini was one of a kind. From the day he was born, he exuded class. He was that crop’s best foal, best yearling and best racehorse. His brilliance was only surpassed by his wonderful character. He will be sorely missed by all on the farm but especially by his handler for the past 15 years, Philip Hampton. It was an honor to be a custodian of this classic winning stallion whose legacy will live long as a broodmare sire.”

Albertrani, Bernardini's trainer, said, “Bernardini was such a majestic animal. He was very talented, one of the best horses I’ve ever been around. I just feel very fortunate to have the opportunity to train him. He was a star.”

Jimmy Bell, president of Godolphin USA, said, “Bernardini was Sheikh Mohammed’s first winner of a Triple Crown race – and a homebred one, too – and then a leading sire. We have been blessed to have him. A beautiful horse, and a lovely character, we are lucky to have so many of his daughters on the farm to continue his legacy.”