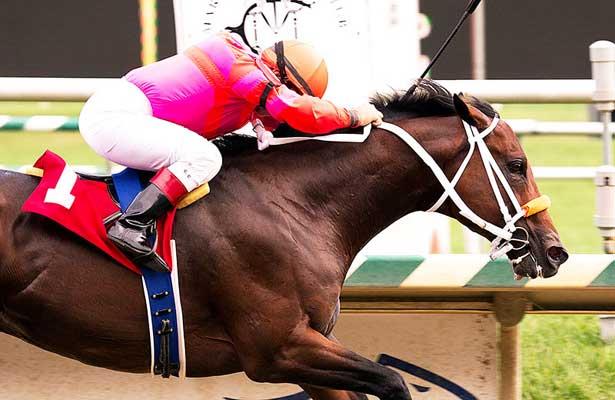 Sent to post as the 3-5 betting choice, Bern Identity pushed by frontrunner King Henry and held off late mover Trickmeister to prevail by a length in 1:08.99 for the 6-furlong distance.

“My horse is a good horse,” Lopez said. “The game plan was to get to the front and improve my position. I knew I was going to have some company down the backside so I tried not to panic. I was keeping him next to me without using my horse too much. He went about his business and dug in the last part to hang on.”

The Kelly Breen trainee has now won three stakes races at three different tracks in the last 35 days after a 553-day layoff. The Indian Charlie colt took My Frenchman at Monmouth Park (Aug. 2) and Tale of the Cat Stakes at Saratoga (Aug. 22) before this victory. Bern Identity won three races as a 2-year-old in 2012, including the Hopeful (G2) and was on the Triple Crown trail before being injured breaking out of the gate in the Holy Bull Stakes (G3) in his 3-year-old debut.

“This is a little bit of validation” Breen said. “We were thinking about the Breeders’ Cup. He needed a fast time so this is a big stepping stone for him. I can’t believe we got him back to this level. He has his problems. He came back from injury after 20 months off. This horse has a lot of heart.”