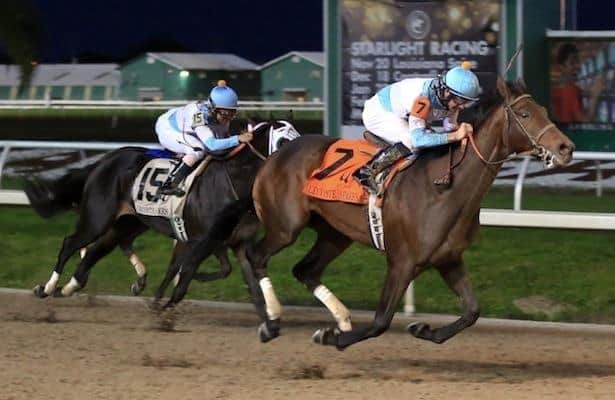 The National Football League’s season may be over, but that does not mean the Benson family of New Orleans Saints ownership are done winning. Saturday’s Grade II $400,000 Veterans Ford Risen Star Stakes features two rising stars for the prominent New Orleans family’s G M B Racing, an ownership entity piloted by Gayle Benson, wife of Tom. Appropriately, the two horses’ monikers are in homage to her husband, who also owns the National Basketball Association’s Pelicans, in Mo Tom (a son of Uncle Mo) – and Tom’s Ready (a son of More Than Ready).

Both Mo Tom and Tom’s Ready are trained by locally based conditioners – Tom Amoss has Mo Tom, while Dallas Stewart has Tom’s Ready – with deep roots in the region and longtime Fair Grounds Race Course & Slots-based strings. An added bonus is that both Mo Tom and Tom’s Ready not only have a tremendous amount of promise between them, but they also displayed such locally in the Grade III $200,000 TwinSpires.com Lecomte Stakes on Jan. 16, sweeping the exacta and producing a raucous New Orleans-style Benson bash in the winner’s circle that evening.

“It's a little overwhelming when you think about it,” Gayle Benson said. “I’m just so happy to be in the race and I try to look at it with as much humility as I can. To know that we have two very talented horses means a lot and I’m hoping one of them wins on Saturday. I don't want to count my chickens, of course, I am just very happy that they’ve done so well.

“Usually we have basketball season, which kind of leads into football season – but now we have a racing season,” she continued. “It breaks up the (monotony) a little. It’s really great to have all these sports in New Orleans. We go to the Fair Grounds on a regular basis and we just love the energy. There’s so much excitement with betting and so much going on. We love it there.”

Mo Tom (3-1 second choice on the morning line) and Tom’s Ready (8-1 co-fourth choice) are expected to be well-supported by the local wagering public in the Kentucky Derby-qualifying event, especially with their local connections. Benson is adrenalized by the prospect of not only having a pair of prospects for the First Saturday in May, but also for its Louisiana local prep, the Grade II $1,000,000 TwinSpires.com Louisiana Derby on Mar. 26.

“It’s almost too much to think about in how exciting it is,” Benson said. “It would obviously mean a lot (to win the Louisiana Derby).

“I wouldn’t be able to favor one horse to another, though,” she continued diplomatically. “But I can say that it’s going to be a wonderful day. We’re hoping to win with one of them.”

Dede McGehee’s Dolphus has been removed from the Grade II $400,000 Veterans Ford Risen Star Stakes on Saturday afternoon by trainer Joe Sharp. The son of Lookin at Lucky and half-brother to the great Rachel Alexandra will reportedly be pointed elsewhere. Sharp cited the short break between his victory three weeks ago in a first-level allowance to the Risen Star as the catalyst for the scratch. A new goal has yet to be named, though Sharp emphasized that he would like to take his time with the chestnut colt.