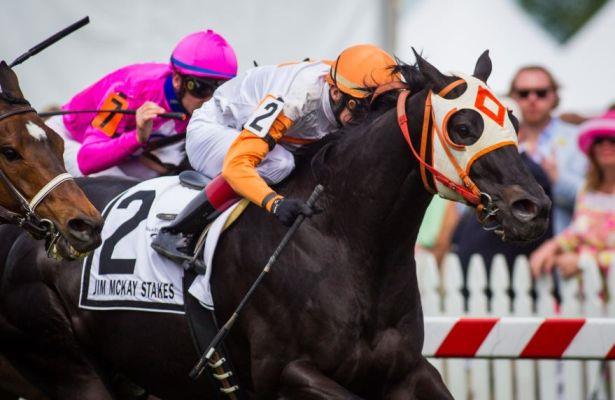 Yet again defying both his age and the younger competition, popular 10-year-old Maryland-bred Ben’s Cat wowed his fans once again with a thrilling neck victory over Spring to the Sky in the $100,000 Jim McKay Turf Sprint Friday at Pimlico Race Course.

Bred, owned and trained by legendary Mid-Atlantic horseman and Hall of Famer King Leatherbury, Ben’s Cat captured the 11thrunning of the five-furlong Jim McKay for the fourth consecutive year and fifth time since 2011.

Ridden by Trevor McCarthy, Ben’s Cat ($7) split favored pacesetter Rocket Heat and 25-1 long shot Spring to the Sky with less than a sixteenth of a mile to the wire, winning by a neck in 56.10 seconds over a firm turf course.

“I was worried. He was back and that other horse was running his eyeballs out setting a real fast pace,” the 83-year-old Leatherbury said. “I knew he’d be kicking in but I didn’t think he’d be able to catch him. He fired right at the end, like he always does. That’s his running style. He’s a great horse, that’s all.”

Ben’s Cat is the winningest horse in training with 32 victories and 26 stakes victories from 55 lifetime starts, earning nearly $2.6 million in purses. According to Equibase statistics he is one of only five horses in the past 40 years to win 25 or more stakes, trailing only Hall of Famer John Henry’s 30. The others are Who Doctor Who, Little Bold John and Hall of Famer Xtra Heat.

“Good horses, all the time they come up, but they don’t last. Fans have a favorite horse and a year or two later, they’re gone,” Leatherbury said. “Here, he just goes and goes and goes and that’s what makes him so popular. He’s still around after all this time.”

Breaking from Post 2 as the 2-1 second choice in a field of eight, Ben’s Cat saved ground along the rail as 4-5 favorite Rocket Heat set a blistering pace of 21.46 seconds for a quarter-mile and 44.04 for the half.

Unable to swing Ben’s Cat wide for his familiar drive on the outside, McCarthy waited for an opportunity with the gutsy gelding and found room past the sixteenth pole to dramatically surge between the front-runners to the cheers of an appreciative crowd.

Spring to the Sky got up for second, a half-length ahead of Rocket Heat. It was another length back to Night Officer in fourth.