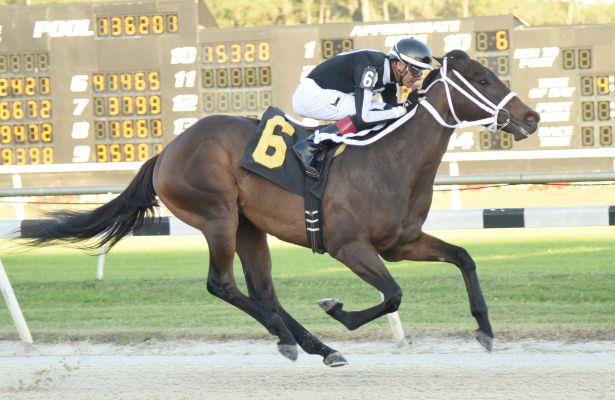 From the time he arrived here about a month ago, trainer Gerald Bennett has told everyone within listening distance his 2-year-old colt Chance of Luck has the potential to be a contender for the Grade II, $350,000 Lambholm South Tampa Bay Derby on March 11.

The gray Kentucky-bred son of Skipshot-Winning Chance, by Alphabet Soup, did nothing in today’s $100,000 Inaugural Stakes to change Bennett’s mind.

Despite receiving a major scare when 15-1 shot Dont Come Knockin staged a whirlwind rally, Chance of Luck and jockey Erick Rodriguez held on for a neck victory in an impressive time of 1:10.84 for the 6-furlong distance on the main track for owner J J Brevan Stable.

But Bennett wasn’t done. Not by a long shot.

Two races later, his talented 2-year-old Florida-bred filly, R Angel Katelyn, led from gate-to-wire to win the $100,000 Sandpiper Stakes for members of her sex under jockey Edwin Gonzalez in a slightly faster time of 1:10.67.

The sweep by Bennett provided an exclamation point to an exciting Cotillion Festival Day card featuring 10 races for 2-year-olds.

Immediately after the Inaugural, Bennett said he plans to point Chance of Luck to the $100,000, 7-furlong Pasco Stakes on Jan. 21.

“I hope he stays sound, because I firmly believe this horse has Tampa Bay Derby potential,” said Bennett, who saddled Crimson Knight to a second-place finish in the Oldsmar oval’s showcase race in 2011. “You get high hopes in this game, but this horse shows me the same kind of stuff as some of the real nice horses I’ve had over the years.

“He’s got a good mind. Even with all those people around him in the winner’s circle, he wasn’t wheeling around or acting up. That’s an awesome race for a horse making his second start, and he should move forward off it.”

Chance of Luck paid $9.80 to win as the second betting choice in the eight-horse field. Bennett’s other entrant, Triumphant Joy, closed well to be third despite having the ground break beneath him at the start.

Rodriguez, who also rode Chance of Luck in his maiden victory on Oct. 28 at Laurel in Maryland, said he felt extremely confident most of the way as his mount sat off a lively pace by Stapleton before unleashing his long, powerful strides on the turn for home.

“He was pretty sharp today and he warmed up well,” the rider said. “I got a clean break and he got in the race by himself without me asking him. I didn’t want to make my move too early, but when I did he opened up quickly. He started looking around a little and kind of spooked from the tote board, but when he saw (Dont Come Knockin) he started kicking again.”

“We were able to get good position early, and he was running strong at the end,” said Jimenez. “He’s still a baby and he’s still learning. I think he’ll keep getting better with more experience.”

The 7-10 favorite, Obvious One, faded to fifth after prompting the early pace.

In the Sandpiper, R Angel Katelyn set all the fractions and responded to Gonzalez’s urgings approaching the quarter-mile pole. Supplemental entry Jumby Bay, from the stable of top trainer Todd Pletcher, closed in determined fashion but was unable to put a dent in the winner’s three-and-a-half length margin. Rashette finished third in the nine-horse field.

R Angel Katelyn paid $5.40 to win as the wagering favorite.

Winner of the Juvenile Filly Sprint Stakes at Gulfstream Park West on Nov. 12 in her previous start, she is 3-for-4 lifetime with one second.

“(Gonzalez) said he had a lot of horse under him and wasn’t really worried at any point of the race,” Bennett said. “I told him to just let her run her race and sit patient, and she’s got the game down pretty well for such a young horse. He played it as it came up, and she took off when he asked her.”

Averill, who won the 2014 Sandpiper with R Sassy Lass, a filly he owns in partnership, is excited to see what’s next for R Angel Katelyn. The $100,000, 7-furlong Gasparilla Stakes here on Jan. 21 is a good possibility.

“Gerry has always been high on her from Day 1,” Averill said, “and we felt pretty confident going into the race. She is a versatile filly, and when she broke on top (Gonzalez) rode her like she was the best horse in the race, which she was. I wouldn’t trade her for any other of the horses in the field and hopefully she will come out good and we’ll look for the next one.”

Gonzalez, a 25-year-old newcomer to the Oldsmar jockey colony, said he had a virtually worry-free trip.

“(Bennett) told me to go to the lead but go easy, and when I asked her to change leads at the quarter-pole, she responded well and just kept going. I knew (Jumby Bay) was charging, but my filly didn’t pay attention,” Gonzalez said.

Around the oval. Daniel Centeno was honored as the season’s first Hampton Inn & Suites Jockey of the Month after the third race, then won the fourth race on the turf and the fifth on the main track. He captured the fourth on 2-year-old filly Cincy Belle for owner Catesby W. Clay and trainer Arnaud Delacour and gave first-time starter Livin a Dream, a 2-year-old filly, a strong ride in the fifth for owner Anthony A. Lenci and trainer Chad Stewart.