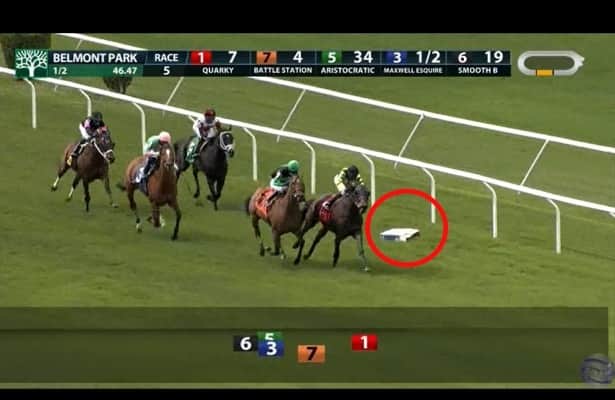 The fifth race at Belmont on Thursday, a turf sprint, was won by the heavy favorite, Maxwell Esquire, under Irad Ortiz Jr. But that doesn't mean it was without surprises.

First, on the turn heading into the stretch, Fast Getaway took an odd step and then unseated Jose Ortiz. Both horse and rider were fine, and Ortiz came back with a win in the next race.

In the stretch, what appeared to be a cardboard box was on the turf near the rail. Quarky, with Trevor McCarthy aboard, was leading when "altered out two paths" to avoid it, as reported in the chart. Maxwell Esquire, the 1-2 favorite, then rallied from third to first and won by 3/4 of a length.

Michael Dini, trainer of Quarky, was not at the race, and he was trying to find out more information about what happened when he was contacted by Horse Racing Nation.

But he has no doubt that the debris cost him the race.

"Oh, yeah. It made him take a U-turn. Did you see how he ducked out real bad? I think it cost him race, that's for sure. He was like, striding clear, and then he like put the brakes on. He's a little goofy – but I can't blame him for that. That thing was like in the three path. And he saw it, and that's why he ducked and he only got beat a length."

But Patrick McKenna, communications director for the New York Racing Association, said in a Twitter post that the results would stand.

A cardboard box blew onto the Widener during the running of the @TheNYRA #Belmont 5th. The Stewards conducted a general inquiry & concluded that all horses moved as one to maneuver around the box & were affected equally. As a result, there was no change to the result of the race.