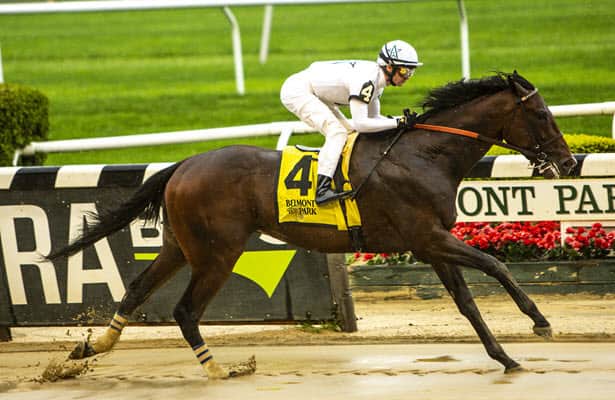 WinStar Farm, CMNWLTH and Siena Farm’s We the People breezed a half-mile in 47.59 seconds Saturday over the Belmont main track with trainer Rodolphe Brisset in the irons in preparation for the Belmont Stakes.

The bay son of Constitution made his way towards the backstretch of a fast Big Sandy in the company of a pony before breaking off on his own to start the four-furlong drill. NYRA clockers caught We the People marking off a quarter-mile in 24.20 seconds as he continued to move strongly through the turn and into the stretch about three paths from the rail.

Brisset eased up on We the People a few strides before the wire, galloping out five furlongs in 1:00.40.

“It was a little fast,” said Brisset as We the People cooled out around the barn. “The track with the moisture in it will carry you. He couldn’t have done it any easier. He was just galloping. He repeated what we’ve been seeing the whole time here. It looked like he really enjoyed it to me. We’ve got to have a good week now.”

The work was the second over Big Sandy for We the People, who had his first drill going the same distance in 48.39 second on May 27. The $230,000 Fasig-Tipton Florida select 2-year-olds in training sale purchase was an impressive winner of the Peter Pan (G3) on May 14 at Belmont, the local prep for the “Test of the Champion.”

We the People schooled in the paddock on Friday and Brisset said he will repeat the exercise again next week ahead of the Belmont.

“We’ll monitor the weather and his weight and then we’ll decide – I’m sure I’ll school him at least one more time next week either in the morning or afternoon during the races,” said Brisset.

We the People enters the Belmont with a 3-for-4 record, his only loss a disappointing seventh-place finish in the Grade 1 Arkansas Derby where he rated in fifth and never fired after going five-wide in the turn. He has won his three starts by a combined 21 lengths, highlighted by his 10 1/4-length romp in the Peter Pan.

Daniel Alonso’s Skippylongstocking, who finished fifth in the Preakness on May 21 at Pimlico, breezed five-eighths in 1:02.41 Saturday over Big Sandy.

NYRA clockers caught the graded-stakes placed colt working solo under Manny Franco through splits of 25.60, 37.80 and out in 1:15.80 over the fast main track.

Trainer Saffie Joseph, Jr, who is looking for his first score in a Triple Crown race, said he was pleased with the effort.

"We're coming back in three weeks, so we weren't looking for much. We wanted a steady, long and easy breeze and that's what we got," Joseph, Jr. said.

Skippylongstocking, a $37,000 purchase at the OBS Spring Sale of 2-year-olds in training, is by the stamina-influencing sire Exaggerator, who finished second in the 2016 Kentucky Derby ahead of a win in that year’s Preakness Stakes.

The talented bay has appreciated added ground with his Beyer Speed Figures increasing in each of his last three starts, including an 88 for a nine-furlong optional-claiming win in March at Gulfstream; a 91 for a third-place finish in the nine-furlong Grade 2 Wood Memorial in April at Aqueduct; and a 94 last out for a fifth-place finish from the outermost post 9 in the 1 3/16-mile Preakness at Pimlico.

"He's going to need to improve again or he'll need some of the others to regress a bit for him to be competitive, but we're hoping he'll go over there and run the race of his life,” Joseph, Jr. said.

Franco, who guided New York-bred Tiz the Law to victory in the 2020 Belmont Stakes, will pilot Skippylongstocking in the afternoon for the first time next Saturday.

Joseph, Jr. said he is hopeful that Franco can work out a stalking trip.

"It seems that in the Belmont it's hard to make up too much ground. Most of the horses that run well are closer to the pace," Joseph, Jr. said. "We don't want to be too far back. So, hopefully he can lay a little bit closer without taking him too much out of his game.”

Saturday was business as usual for Kentucky Derby winner Rich Strike, who stretched out to two miles in a gallop over the fast main track at Belmont Park. The son of Keen Ice had been galloping 1 1/2 miles for the past two days and went the extra half-mile in his first time over a dry Big Sandy.

Trainer Eric Reed watched from the track apron as a calm Rich Strike awaited his turn to step onto the track. With a flock of photographers around him, the chestnut stood quietly beneath the Belmont Park sign at the exit of the tunnel with his regular pony, Stormy, and had his ears forward while he observed the scene. He became a touch excited as he approached the dirt, but never lost his composure and continued without issue under regular exercise rider Gabriel Lagunes.

“He was great,” said Reed, who has been awaiting the chance to observe Rich Strike over a dry track. “The rider said he was moving good and liked it. When he came down the stretch, I was loving the way he was moving today. He can get into his stride and not get distracted here. We went two miles today and tomorrow we’ll probably back it up a little bit.”

Reed noted that Rich Strike has matured immensely since he posted his memorable 80-1 victory in the Kentucky Derby.

“We had to stand and wait for the track to open. There were all those horses in the tunnel and he never paid his mind to anything,” Reed said. “The old Richie would have been tougher than that. The pony has given him a lot of comfort. He and Stormy are buddies.”