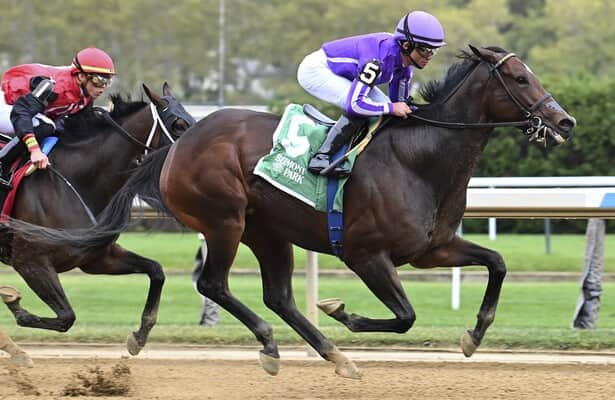 Jockey Joel Rosario had to do no more than give a shake of the reins for Kimari to overtake the lead in deep stretch and score her second graded coup of the year in Sunday’s Grade 2, $250,000 Gallant Bloom for fillies and mares 3-years-old and upward sprinting 6 1/2 furlongs at the Belmont at Aqueduct fall meet.

Owned by Jonathan Poulin, Westerberg and the Coolmore trio of Susan Magnier, Derrick Smith and Michael Tabor, Kimari was much the best in the field of five. Trained by Wesley Ward, she had confident handling from Rosario, who has ridden the 5-year-old Munnings mare in 7 of 16 starts, including her last-out victory in the Honorable Miss Handicap (G2) on July 27 at Saratoga. The Gallant Bloom marked the third graded win for Kimari, adding to a score in the Madison (G1) last year at Keeneland.

Sent from post 5 as the 3-5 mutuel favorite, Kimari raced in third, 1 1/2 lengths back of pacesetter Lady Rocket, settling comfortably to her outside through an opening quarter-mile in 23.55 seconds over the fast main track with Remain Anonymous taking up second position along the rail.

#5 Kimari (3/5) takes the Gallant Bloom (G2) off the layoff with Joel Rosario up for Wesley Ward.

Positions remained unchanged through a half-mile in 46.98 seconds as Lady Rocket was coaxed by jockey Irad Ortiz Jr. She came under threat from a loaded Kimari, who gained on her rival without any encouragement from Rosario.

Kimari was on even terms with Lady Rocket as the pair had pulled away from their other three rivals at the sixteenth pole, needing just one shake of the reins from Rosario to take command and come home first in hand by 1 1/4 lengths over an all-out Lady Rocket at a final time of 1:16.58.

It was another 9 1/2 lengths back to the New York-bred Sterling Silver, who earned her third graded placing, with Cheetara and Remain Anonymous completing the order of finish.

Ward said he had considered giving Kimari her final Breeders’ Cup prep in the Thoroughbred Club of America (G2) on Oct. 8 at Keeneland but opted for the Gallant Bloom to give her more time ahead of the Filly & Mare Sprint on Nov. 5 at Keeneland.

“That’s what you want to see, right? We were excited, and this race set up beautifully for her time-wise to get from here to the Breeders’ Cup,” Ward said. “The timing gave her a couple of extra weeks. She always relishes the time between starts. For her it should work out perfect. Whether she’s good enough, we’ll find out.”

Ward said Kimari benefitted from breaking from the outermost post in her last two starts.

“When you’re last in, she bounces away from there,” Ward said. “In the Breeders’ Cup it’ll be a bigger field. So if she gets there down below, Joel will have to work his way out, so we’ll see how it goes.”

“She’s special. She runs hard all the time, and she ran a good race again today,” Rosario said. “She was very comfortable. She was loving what she was doing out there. For a second I was worried the horse in front of me would keep moving forward, but my filly kept gaining, and I had a lot of confidence.”

Kimari’s last-out Honorable Miss victory was a triumphant return to the winner’s circle in graded company, garnering a career-best 105 Beyer Speed Figure, according to Daily Racing Form, for the half-length score over multiple graded stakes-winner Frank’s Rockette. She flashed her talent early in her career, winning on debut in stakes company against males in the 2019 Indian Summer at Keeneland before a trip to Royal Ascot three starts later, finishing a close second in the Commonwealth Cup (G1).

Ortiz said Lady Rocket, who garnered a lofty 107 Beyer for her nine-length romp in the Go for Wand (G3) in December at Aqueduct, gave her all.

“No excuses. I can’t complain. We were second best today,” Ortiz said. “We got beat by a very nice filly.”