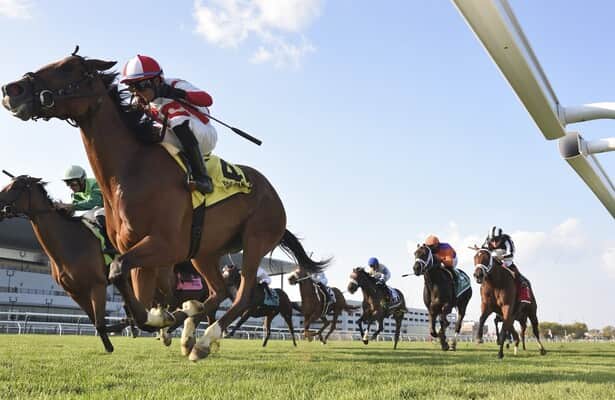 Faith in Humanity topped a trifecta of Chad Brown-trained horses in Sunday’s Grade 3, $150,000 Pebbles, a one-mile, inner-turf test for sophomore fillies at the Belmont at the Big A fall meet.

It was a record-extending fifth Pebbles score for the four-time Eclipse Award-winning conditioner, who also saddled runner-up Gina Romantica and third-place Bahamian Club.

The Manny Franco-piloted Faith in Humanity, a France-bred daughter of Lope de Vega, posted a gate-to-wire score and avenged her last-out defeat to Gina Romantica in the restricted Riskaverse on Aug. 25 at Saratoga.

Franco said he knew that Gina Romantica, owned by Klaravich Stables, would come calling late in the lane.

“I was worried about that one, because she beat me last time, and I knew that was the horse to beat, but at the same time I had a good feeling going to the three-eighths pole, because I knew I had horse,” Franco said. “I knew they'd have to run hard to get me. The turns are pretty good for the horses being near the pace.”

A debut winner in July at Monmouth Park ahead of the Riskaverse, Faith in Humanity led the field through splits of 24.13, 49.55 and 1:13.65 over the firm going from post 4. A Mo Reay tracked in second position with Breeze Easy saving ground in third.

The pacesetter opened up a 2 1/2-length lead at the stretch call as the Flavien Prat-piloted Gina Romantica came with her wide bid, easily surging past A Mo Reay to take aim at the leader.

Gina Romantica fought gamely down the lane, but Faith in Humanity continued to find more, staving off her stablemate for a half-length score at a final time of 1:36.36.

Gina Romantica completed the exacta by three-quarters of a length over Bahamian Club with the late-running Majestic Glory, A Mo Reay, Miss Carol Ann, Golden Rocket, Sail By and Breeze Easy completing the order of finish.

Franco said his filly was traveling easily on the lead.

“She was so nice and comfortable on the lead with her ears up,” Franco said. “I think that was the key, that she relaxed for me. I had a lot of horse under me when I asked her to go.”

Prat said Gina Romantica, who rallied from deep to win the 1 1/16-mile Riskaverse, may have been hampered by her outside post.

“I got myself as close as I could from that post, and then there was a slow pace," Prat said. "The leader is actually a good filly. She kicked home, and we just ran out of ground.”

Brown, who won three races on Sunday’s card, captured the Pebbles previously with Partisan Politics in 2015, Rubilinda in 2017, Stella di Camelot in 2018 and Blowout in 2019.

Bred in France by Ecurie Des Monceaux and Lordship Stud Limited, Faith in Humanity banked $82,500 in the victory while improving her record to 3: 2-1-0. The Arqana Deauville September yearling-sale purchase returned $13.80 for a $2 win ticket.