Belmont weekend runners: Here's where 11 are headed next 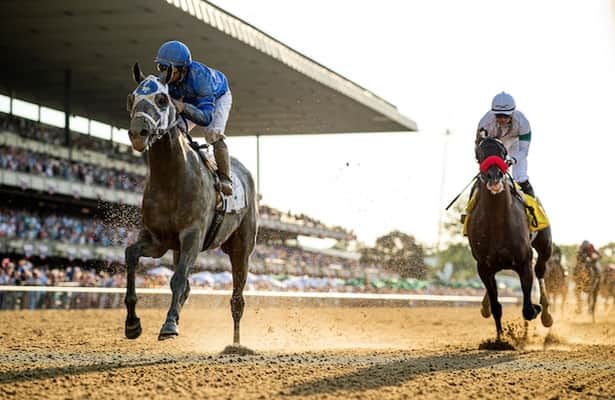 Coming out of a big weekend for graded stakes at Belmont Park, here is where a number of winners and other runners are headed next, courtesy of notes from the New York Racing Association.

• Hot Rod Charlie, runner-up Belmont Stakes. Trainer Doug O'Neill said he has no immediate plans but that the Aug. 21 Pacific Classic (G1) at Del Mar is a possibility.

• Silver State, winner, Metropolitan (G1). He won an automatic berth in the Breeders' Cup Mile, but David Fiske of co-owner Winchell Thoroughbreds said a decision will need to be made at what distance his connections want to target.

• Mischevious Alex, third, Metropolitan. Trainer Saffie Joseph Jr. said he would like to cut back to six or seven furlongs, aiming for Grade 1 races at Saratoga with a goal of the Breeders’ Cup Sprint.

• Domestic Spending, winner, Manhattan (G1). Trainer Chad Brown said his next start will be at Arlington, presumably in the Aug. 14 Mister D. Stakes (G1), formerly known as the Arlington Million. He would be following the path of Brown's Bricks and Mortar, who won the won the Turf Classic (G1) and Manhattan before taking the Arlington Million and Breeders’ Cup Turf in 2019.

• Search Results, winner, Acorn (G1). Brown said the Coaching Club American Oaks (G1) is a possibility but that if she needs more time, she could train to the Test (G1) on Aug. 7 at Saratoga Race Course.

• Casa Creed, winner, Jaipur (G1). No immediate target, though trainer Bill Mott said he could look for a shorter distance after cutting back here.

• Lone Rock, winner, Brooklyn (G2). After his third straight win (plus a close second) at 1 1/2 miles, trainer Robertino Diodoro said the 1 3/4-mile Birdstone at Saratoga on Aug. 5 is a possibility.