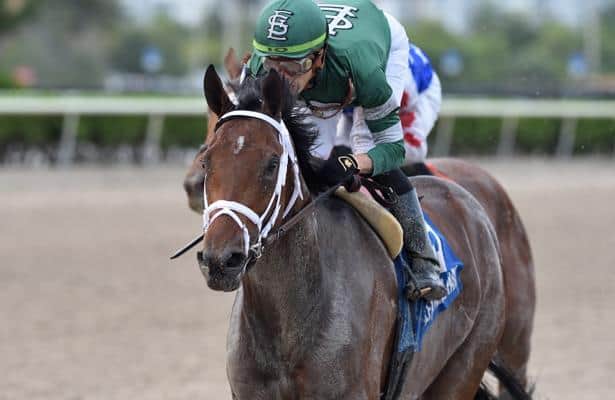 Dr Post, the runner-up in the Belmont Stakes in June, will make his Saratoga Race Course debut as one of two talented entrants for trainer Todd Pletcher in Saturday's Grade 2, $150,000 Jim Dandy for sophomores going nine furlongs.

St. Elias Stable's Dr Post hasn't finished off the board in four starts this year. After running fourth in his lone start as a juvenile, the Quality Road colt won his first two races of 2020, breaking his maiden in March going seven furlongs at Gulfstream Park before stepping up to stakes company at the same track, winning the 1 1/16-mile Unbridled in April.

Handling the stretch out in distance encouraged his connections to try deeper waters, and Dr Post responded with a game second to Tiz the Law in the 1 1/8-mile Belmont Stakes on June 20, finishing 3 3/4 lengths back to the eventual Travers (G1) winner and the morning-line favorite in Saturday's Kentucky Derby.

Pletcher brought Dr Post back in the Haskell (G1), where he overcame a wide trip to still finish third behind Ny Traffic and the winner Authentic, earning a 95 Beyer Speed Figure for the second straight time.

"He's been training well," Pletcher said. "He's a high-quality colt and trains accordingly. "I'm very happy with him. He showed his quality in the Belmont when he ran as close to Tiz the Law as anyone else has. He kind of had a less than ideal trip in the Haskell, but hopefully he's ready to move forward here."

Though skipping what is for this year the middle jewel of the Triple Crown with the Kentucky Derby, Dr Post could parlay a potential stellar effort in the Jim Dandy into a spot in the Preakness on Oct. 3 at Pimlico Racecourse.

"We're taking it one race at a time, but that's in the back of our mind," Pletcher said.

Irad Ortiz Jr., aboard for his Unbridled win and the Belmont Stakes, will have the return call from post 6.

His stablemate, Wertheimer and Frere's Happy Saver, started his career 2-for-2 with a 5 1/2-length debut score on June 20 and a four-length win at the Jim Dandy distance against allowance company on July 26 at Saratoga.

"He's ready for the next step," Pletcher said. "He's certainly run well enough in his allowance races to indicate that he had a stakes spot in his future. Now, we'll see if he can handle the step up in class."

Godolphin's Mystic Guide will have an equipment change as he makes his second straight graded stakes appearance. After tracking in second-last position, Mystic Guide rallied for third in the eight-horse Peter Pan (G3) under jockey Jose Ortiz going 1 1/8 miles on July 16 at the Spa. Trainer Michael Stidham said he put blinkers on Mystic Guide in subsequent workouts and hopes the change will contribute to being more forwardly placed on Saturday.

"He was way out the back on the backstretch and had given himself way too much to do and wasn't really running into the dirt that day," Stidham said. "Ortiz said every time he tried to get him going, he didn't really kick in until he swung him out turning for home. So, we put the blinkers on in the morning and he seems to be handier with them on. We're hoping he can lay a little closer and have a better chance to win by getting a better position on the backside."

Mystic Guide is 1-1-2 in four career starts. Unraced as a 2-year-old, the Ghostzapper colt ran third in his first start in February at Fair Grounds before winning there by five lengths after Stidham stretched him out from six furlongs to 1 1/16 miles in his second start. On June 4, Mystic Guide ran second to Tap It to Win, who subsequently ran fifth in the Belmont Stakes next out, in an allowance tilt, setting up his spot in the Peter Pan.

Since that race, Mystic Guide has been training at Fair Hill, most recently working four furlongs in 48.20 seconds on Aug. 30. Stidham said he's looking for improvement against another talented field.

"He's got a good style but he cannot give himself that much to do and be that far back at the half-mile pole, so it's going to depend on what kind of position he can get and his kick will hopefully put him in front," Stidham said.

Ortiz will be in the irons again, drawing the outside post 7.

Jesus' Team has registered three consecutive Beyers of 90 or better, including a career-best 96 last out when second to Pneumatic in the Pegasus on Aug. 15 at Monmouth Park. Trained by Jose Francisco D'Angelo, Jesus' Team was moved up to stakes company in his eighth career start with an ambitious spot, running fourth in the Haskell in Monmouth's premier race.

The Jim Dandy's most experienced entrant with nine starts, Jesus' Team is 2-3-1 entering his first appearance at Saratoga. Luis Saez piloted him to a win against claimers in May at Gulfstream and again drew the assignment, breaking from post 4.

Celtic Striker, fourth in the Peter Pan, won the Easy Goer contested at 1 1/16 miles on June 25 at Belmont. The Ray Handal trainee has three wins and a second-place finish in eight career starts to his credit. Joel Rosario has the call from post 5.

Liveyourbeastlife will run in his first stakes in six starts, facing higher caliber for the first time since a sixth-place effort in the Nashua (G3) last November at Aqueduct Racetrack. Trained by Jorge Abreu, Liveyourbeastlife will pick up the services of Junior Alvarado and will exit post 2.

First Line, off his first career win on July 29 at Saratoga, will make his stakes debut in his fifth start for trainer Orlando Noda, drawing post 3 with Dylan Davis aboard.