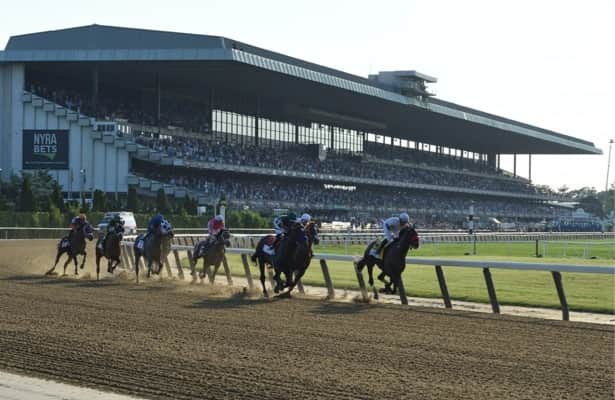 Can Rich Strike win his second classic? Does Nest have a shot against the boys? These are a few of the questions that could be answered with the June 11 running of the $1.5 million Belmont Stakes.

With full awareness that the field is far from set, here is what we know about how it's shaping up.

Rich Strike. The 80-1 Kentucky Derby winner is scheduled to leave Churchill Downs for Belmont on next Tuesday. He breezed four furlongs Saturday in 47.2 seconds for trainer Eric Reed, who told Horse Racing Nation on Sunday that the colt is “absolutely 100 percent.”

Mo Donegal. Trainer Todd Pletcher plans to bring the Wood Memorial winner back for the Belmont after he finished fifth in the Kentucky Derby. He worked four furlongs in 50.02 seconds on Belmont’s dirt training track Friday.

We the People. Rodolphe Brisset’s colt is 3-for-4 after winning the Peter Pan (G3) by 10 1/4 lengths. His only loss was a seventh-place finish in the Arkansas Derby. “He's going to have two works and we’ll make sure the works are good enough.” Brisset told HRN Tuesday. “And obviously, hopefully stay healthy, but as of today, he is pointing for the Belmont.”

Golden Glider. The Mark Casse trainee was second in the Peter Pan but didn’t finish in the money in three graded stakes before that, finishing fourth in both the Blue Grass (G1) and Tampa Bay Derby (G2) and fifth in the Sam F. Davis (G3). “We’re going to try to follow the same path we did with Sir Winston,” Casse told HRN Tuesday. “He ran second in the Peter Pan then went on to win the Belmont. We’re going to try to do the same.”

Skippylongstocking. A decision will be made probably toward the end of this week, trainer Saffie Joseph Jr. told HRN Tuesday. "All being well, he will run." He was fifth in the Preakness and third in the Wood Memorial (G2) before that.

Nest. Another Pletcher trainee, the Ashland Stakes (G1) winner finished second in the Kentucky Oaks and is possible for the Belmont. She worked in company with Mo Donegal on Friday, also breezing four furlongs in 50.02 seconds.

Barber Road. He hasn’t won in six starts since November, but he was in the money each time, which includes a second in both the Arkansas Derby (G1) and Southwest (G3) and a third in the Rebel (G2), before finishing sixth in the Kentucky Derby. He worked four furlongs in 48.6 seconds Saturday at Churchill Downs.

Ethereal Road. Trainer D. Wayne Lukas was non-committal Sunday about whether his late Kentucky Derby scratch would be pointed to the Belmont. He returned Saturday and won the Sir Barton Stakes on the Preakness undercard.

Kuchar. He won an allowance race Sunday at Churchill Downs and was second in the Oaklawn Stakes before that. "He is under consideration for now, depends how he trains for the next 10 days," Brisset said in a text message. If not the Belmont, Kuchar will be pointed to the Ohio Derby (G3), he said.

Preakness winner Early Voting will skip the "Test of the Champion," with trainer Chad Brown looking at a summer campaign at Saratoga. Steve Asmussen is doing the same with Epicenter, runner-up in both the Kentucky Derby and the Preakness.

Brisset said the Belmont would have been a consideration for Western River if he had finished second in the Peter Pan rather than fourth. “We have some allowances in June at Churchill with very big purses. We've just got to do right by the horse and don't really want to waste the race.”