Belmont Stakes 2022: Can the favorite win from the front end? 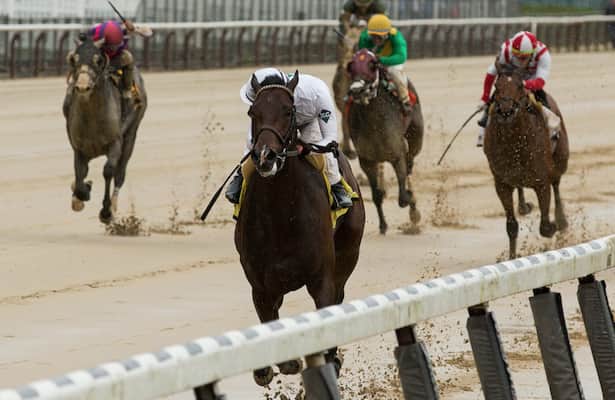 In the 2022 Belmont Stakes, the 2-1 morning-line favorite We the People is the only front runner in a field that with seven other horses who have a strong preference to race from off the pace.

If We the People wins the 1 1/2-mile Test of the Champion on Saturday, he will become only the fourth horse since 2000 to win with a front-running effort and would join a pair of Triple Crown winners. Justify in 2018 and American Pharoah in 2015 went to the lead right out of the gate and did not look back. Justify cruised around Big Sandy two lengths ahead pretty much the entire trip, and American Pharoah got to the front and widened his advantage to a final margin of 5 1/2. The 38-1 long shot Da’ Tara in 2008 was ahead by three lengths at the first call and never looked back.

The rest of this year’s Belmont field have one of the rallying styles – pace presser, stalker, closer or deep closer.

Three pace pressers won the Belmont during this century. They were a length or two behind the front runner and took the lead about a quarter-mile before the finish. Tiz the Law did it in 2020, along with Ruler on Ice on a sloppy track in 2011 and Commendable in 2000 for D. Wayne Lukas.

Skippylongstocking and Nest had success racing from a stalking position and that style produced nine winners, including Essential Quality last year. He found the winner’s circle with a move from seven lengths behind in fifth place to win by more than a length. There was a streak of stalkers who were victorious from 2012 to 2014 with Union Rags, Palace Malice and Tonalist.

Creative Minister, Mo Donegal, and Golden Glider will try to win this year from farther behind as closers. It seems like the long distance of the Belmont should give closers an advantage, but that is not the case. Since 2000, only six closers won the Belmont. The most recent one was Sir Winston in 2019.

Kentucky Derby winner Rich Strike and Barber Road are expected to be farthest behind in the Test of the Champion and will have to win as deep closers. That was the most unlikely outcome in the last 22 years of the Belmont Stakes and happened only once in 2006 when Jazil rallied from almost 12 lengths behind.

This chart shows the running style of the Belmont Stakes winners since the year 2000. 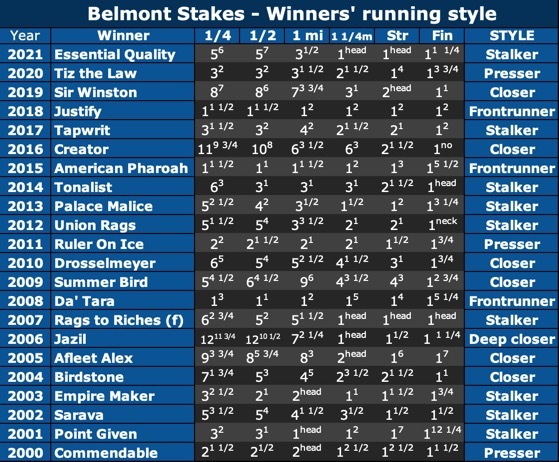