Belmont Stakes 2021: Odds and analysis for the 8-horse field 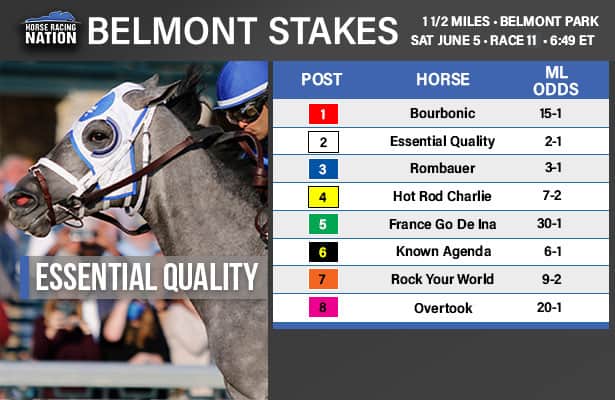 A field of eight 3-year-olds will start in Saturday’s Grade 1, $1.5 million Belmont Stakes. This is the smallest field since 2015, and it is the first time since 2010 that there is no horse to compete in all three legs of the Triple Crown.

The field includes five horses that appeared in the Kentucky Derby (G1) five weeks ago and two that ran in the Preakness three weeks back; none of them ran in both races. The other starter came by way of the Peter Pan (G3) at Belmont Park.

Here is a full-field analysis for the Belmont Stakes, with post time set for 6:49 p.m. EDT. The official morning-line odds are provided by NYRA line-maker David Aragona.

1) Bourbonic (15-1 – Bernardini – Todd Pletcher / Kendrick Carmouche – 7: 3-1-0 - $465,880) The 72-1 winner of the Wood Memorial (G2) finished 13th in the Kentucky Derby at 30-1. Before the Derby, Bourbonic won three of four of his races. Now, he must face a field full of horses that competed in the first two legs of the Triple Crown. Bourbonic seems like the type that will be able to get the 12-furlong distance, but he would have to improve enough to beat three Derby horses who beat him in that race. Toss.

2) Essential Quality (2-1 – Tapit – Brad Cox / Luis Saez – 6: 5-0-0 - $2,415,144) Based on his five wins in six career starts – including victories in two Grade 1s, a Grade 2 and a Grade 3 – Essential Quality was made the 2-1 morning line favorite. As the deserving 2.90-1 favorite in the Kentucky Derby, Essential Quality had to race wide and could not make up much ground down the stretch as he finished fourth. To his credit, it has been very hard to pass horses at Churchill Downs throughout the meeting. However, his unorthodox stride in the front continues to raise questions about his ability go even farther in the Test of the Champion. Use underneath.

3) Rombauer (3-1 – Twirling Candy – Michael McCarthy / John Velazquez – 7: 3-1-1 - $890,500) No doubt that Rombauer is the feel-good story of this 3-year-old season thus far. Up-and-coming trainer Michael McCarthy won his first Triple Crown race in the Preakness. The former Todd Pletcher assistant was first congratulated by his mentor on the track right after the race. The owner/breeder has a very small operation with just a couple of mares. Yes, Rombauer got an ideal pace set-up in Baltimore, but the son of Candy Ride took advantage of it and blew by the field to win convincingly. He had the look of an improving horse heading into that victory and should continue to do so in what will be only his fourth start of the year. Rombauer is the only horse to have a victory in his most recent race. He went right to New York after the Preakness to prepare and will get the services of Hall of Famer John Velazquez. Top pick.

4) Hot Rod Charlie (7-2 – Oxbox – Doug O'Neill / Flavien Prat – 8: 2-1-3 - $1,305,700) Jockey Flavien Prat moves off the Preakness winner Rombauer to ride Hot Rod Charlie. Distance does not seem to be a problem after running third in the Kentucky Derby (G1) and winning the Louisiana Derby (G2). In the first leg of the Triple Crown, he stalked the pace and made up ground. In Louisiana, he led the 9 1/2 furlongs almost the whole race. He will come to the Test of the Champion well rested after skipping the Preakness. Win contender.

5) France Go de Ina (30-1 – Will Take Charge – Hideyuki Mori / Ricardo Santana Jr. – 5: 2-0-0 - $145,291) His career began in Japan as a 2-year-old with a maiden and an allowance win. This year he shipped to Dubai, where he ran sixth in the UAE Derby (G2). Then the son of Will Take Charge finished seventh in the Preakness after pressing the pace. Although he may be able to compete for the entire 1 1/2 miles, he has yet to do so successfully at the Grade 1 level. Toss.

6) Known Agenda (6-1 – Curlin – Pletcher / Irad Ortiz Jr.) – 7: 3-1-1 - $541,700) It is hard to know what to expect from Known Agenda after his ninth-place finish in the Kentucky Derby. His general lack of speed put him far back on the first Saturday in May, and the best he could do was get to ninth. However, a return to his performances at Gulfstream Park this spring, including that Florida Derby (G1) triumph, make him a serious contender to win the Belmont, since the distance should not be a problem for the son of Curlin. Use underneath.

7) Rock Your World (9-2 – Candy Ride – John Sadler / Joel Rosario – 4: 3-0-0 - $546,600) Read all the handicapping articles about the Belmont Stakes that you want and you will find the same thing – Rock Your World will be the pacesetter because that is his only chance to win. He won the Santa Anita Derby (G1) on the front end against the eventual Kentucky Derby winner, but he lost all chance in the Run for the Roses after a rough and tumble start. Rock Your World’s prior two wins were from stalking positions and on the turf. I am not confident that he can repeat that Santa Anita Derby performance. You can’t use all the horses in your wagers, and there are always tough decisions to make. Toss.

8) Overtook (20-1 – Curlin – Pletcher / Manny Franco – 5: 1-1-2 - $131,380) Great breeding and a $1 million price tag made this Todd Pletcher runner highly regarded from the start. After his maiden victory at Aqueduct in December, Overtook ran second in the Withers (G3) and third in the Peter Pan (G3). Those two Grade 3 performances make it hard to think that he could beat this Belmont field. To his credit, his breeding says that he should handle the 1 1/2-mile distance. Toss.

Summary: The Belmont Stakes field includes several of the highly regarded sophomores, but just how good is this crop of 3-year-olds? This is a question that is hard to answer and one that makes it difficult to be confident about any choice to win the 12-furlong race.

The top two finishers from the Run for the Roses are not here, although this Belmont field does include the top three Derby choices in Essential Quality (2.90-1), Rock Your World (4.70-1), and Hot Rod Charlie (5.60-1), along with the Preakness winner Rombauer.

Even if Rock Your World goes right to the lead, don’t expect a particularly fast pace because these riders know that handling the Belmont distance will not be easy. That is why the race is called the Test of the Champion.

Based on class and the potential to get the 12 furlongs my top choices are Rombauer and Hot Rod Charlie.