Belmont Stakes 2020 to run at nine furlongs in June 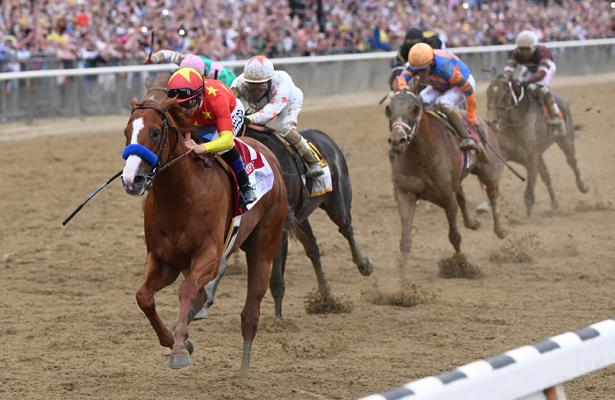 The New York Racing Association announced Tuesday that the 152nd renewal of the Grade 1, $1 million Belmont Stakes -- to be contested at nine furlongs in 2020 -- will take place on Saturday, June 20, at Belmont Park as the opening leg of the Triple Crown for the first time in history.

To align with required health and safety measures implemented in New York to mitigate risk and combat the spread of COVID-19, the Belmont Stakes will be held without spectators in attendance.

"While this will certainly be a unique running of this historic race, we are grateful to be able to hold the Belmont Stakes in 2020," said NYRA President & CEO Dave O'Rourke. "Thanks to our partners at NBC Sports, fans across the country can look forward to a day of exceptional thoroughbred racing at a time when entertainment and sports are so important to providing a sense of normalcy."

As the exclusive broadcast partner of the Belmont Stakes and Triple Crown, NBC Sports will present three hours of live coverage from Belmont Park on the day beginning at 3 p.m. ET.

Traditionally contested at 1 1/2 miles and held as the third and final leg of the Triple Crown, the 152nd running of the Belmont Stakes will be run at a distance of 1 1/8 miles to properly account for the schedule adjustments to the Triple Crown series and overall calendar for 3-year-olds in training.

Initially contested at a distance of 1 5/8 miles at Jerome Park, the first Belmont Stakes was won by Hall of Fame filly Ruthless in 1867. For a two-year period in 1893-94, the Belmont Stakes was run at nine furlongs at Morris Park Racecourse with Comanche winning in 1893 and Hall of Famer Henry of Navarre victorious a year later. The 1 1/2-mile distance was established in 1926.

All Belmont Stakes Racing Festival tickets are subject to full refunds. Fans who purchased directly from the NYRA Box Office or a NYRA sales representative are asked to complete this web form to request a refund or account credit. Fans who purchased BSRF tickets through Ticketmaster will receive an email directing them to log in to their Ticketmaster account to request a refund or credit.