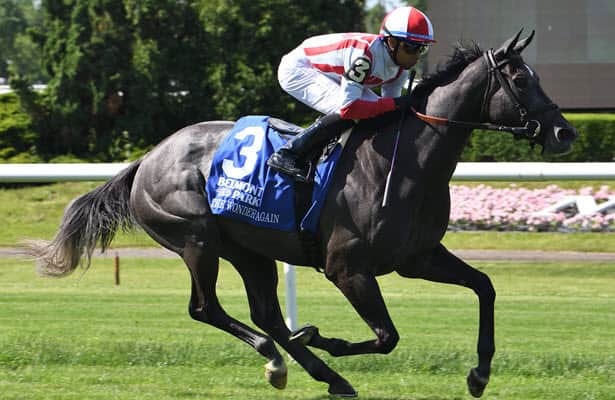 A competitive field featuring three contenders from the barn of Chad Brown and five invaders from Europe lead a 10-horse field assembled for Saturday’s Grade 1, $700,000 Belmont Oaks Invitational for 3-year-old fillies going 10 furlongs over the inner turf at Belmont Park.

Consumer Spending, a More Than Ready filly, has won both of her starts this year at stakes level. After defeating Breeders’ Cup Juvenile Fillies Turf winner Pizza Bianca in the Memories of Silver in April at Aqueduct, Consumer Spending won the Wonder Again (G2) on June 9 at Belmont Park.

A maiden winner at second asking over a yielding inner turf in September at Saratoga, Consumer Spending captured the Selima one month later at Laurel Park before finishing a close sixth beaten 1 3/4 lengths in the Breeders’ Cup Juvenile Fillies Turf.

“She’s been a pleasant surprise,” Brown said. “We put her on course, hoping that she develops. They don’t always do that. I was on the fence about her if she was going to be a horse that was precocious and a good 2-year-old. She’s really matured physically and mentally; she’s gotten stronger in her races and in her works. She stretched out going further than I thought she would. All things positive for her and she continues to advance in her career.”

Manny Franco, who piloted Consumer Spending to both of her victories this year, will return from post No. 5. Franco and Brown will seek their fourth collaborative stakes win at the Belmont spring/summer meet.

“He’s done a fabulous job with her, as he’s done with many of our horses,” said Brown.

McKulick boasts three graded stakes placings in four lifetime starts. After a triumphant career debut last August at Saratoga, the daughter of Frankel was third next out as the beaten favorite in the Miss Grillo (G2) in October at Belmont Park. Upon returning to action seven months later, McKulick was a late-closing second in the Edgewood (G2) on Churchill Downs’ Kentucky Oaks undercard. She arrives at the Belmont Oaks off a second in the Regret (G3) on June 4 at Churchill.

“They were paceless races and she’s looking for a mile and a quarter,” Brown said of her two starts this year. “She’ll improve as she runs longer.”

McKulick will break from post No. 1 under Irad Ortiz, Jr.

Haughty brings a consistent 4: 2-0-2 record to the Belmont Oaks, exiting her first stakes victory in the Penn Oaks on June 4 at Penn National. The Empire Maker bay was a 4 3/4-length winner of her 3-year-old debut, which came seven months after a late-closing third in the Breeders’ Cup Juvenile Fillies Turf, finishing three-quarters of a length to Pizza Bianca.

Haughty will leave from post No. 3 under Flavien Prat.

Five fillies by way of Europe have crossed the Atlantic Ocean in search of Belmont Oaks accolades representing three countries, including Ireland’s dual group stakes winner Agartha for trainer Joseph O’Brien. Owned by Heider Family Stables, Agartha has yet to go past one mile in 11 lifetime starts, exiting a fifth-place finish in the Irish 1000 Guineas (G1) on May 15 at The Curragh.

Agartha, a daughter of second crop sire Caravaggio, garnered prominent victories last year when taking the Silver Flash (G3) at Leopardstown last July at 16-1 odds before capturing the Debutante (G2) at The Curragh the following month as the lukewarm favorite. She closed out her 2-year-old campaign with a pair of Group 1 efforts, the best taking place in the Moyglare Stud in September at The Curragh, where she finished a close second.

“She had a pretty incredible 2-year-old season,” said Heider. “She’s a filly that’s interesting. She’s by Caravaggio. Iin Europe they remember him being an incredibly fast son of Scat Daddy. (Breeder) Anne Marie (O’Brien), as she often does, crossed speed with stamina. The dam was also trained by Joseph, and she was Group 3-placed, but she did a lot of her running going a mile and a quarter to a mile and a half, so she was a true stayer. The female family is just full of high-class Group 1 and Group 2 winners. The vast majority all were stayers.”

Hall of Fame jockey John Velazquez has the call from post No. 9.

Owned by Coolmore partners Derrick Smith, Michael Tabor, Mrs. John Magnier and Westerberg, Concert Hall finished a distant third in the Irish 1000 Guineas (G1) on May 22 going one mile at The Curragh three starts back, which came on the heels of a triumphant 3-year-old debut in the ten-furlong Salsabil at Navan.

A bay daughter of Dubawi, Concert Hall enters off two fourth-place finishes at Group 1 level in the Oaks on June 3 at Epsom and most recently the Pretty Polly at The Curragh. As a 2-year-old, she won The Curragh’s Weld Park (G3) going seven furlongs.

Concert Hall is out of the Group 1-winning Galileo mare Was, who captured the 2012 Epsom Oaks, and comes from the same family as dual Group 1-winner New Approach.

Shipping to the states by way of the Moulton Paddocks at Newmarket, England is Godolphin’s With The Moonlight for trainer Charlie Appleby.

The bay daughter of Frankel, and full-sister to Group 1-winner Dream Castle, finished last last of 11 in the English Oaks, where she secured prominent outside position early on but flattened out in the stretch run. The effort came just one month after winning her 2022 debut, which came stakes level going the Belmont Oaks distance at Newmarket.

Appleby also sends out Nations Pride for the Belmont Derby, and said With The Moonlight has some things in common with her stablemate.

“She’s pretty similar to Nations Pride,” Appleby said. “She got beat as a juvenile on the back end over soft ground in a listed race and then came out and won the Pretty Polly decisively on quick ground. In the Oaks, she similarly didn’t stay on that (softer) ground. Back to a mile and a quarter and back on a sound surface should suit. They have very similar profiles and if they both turn up fit and well, they’ll be very competitive.”

Appleby will looking to build on his recent success in shipping horses to high caliber wins in North America. Last year, he earned eight Grade 1 victories in North America, including the Just a Game and Diana on the NYRA circuit with Althiqa.

World-renowned jockey Frankie Dettori will hope to perform his signature flying dismount in the Belmont winner’s circle after he pilots With The Moonlight from post No. 4.

Representing France in the Belmont Oaks are Francis-Henri Graffard-trained Know Thyself and Hot Queen from the yard of Pia Brandt.

Know Thyself, owned by Craig Bernick, enters off a third-place finish on May 15 going 11 furlongs at Longchamp. The Galileo chestnut filly earned black type in her previous start when second in the Group 3 Prix Vanteaux on April 10 over the same oval.

Graffard, who trained Breeders’ Cup Juvenile Fillies turf runner-up Malavath, will send out his first Belmont Oaks contender in Know Thyself, who will be ridden by Julien Leparoux from post No. 8.

Finn Blichfeldt’s Hot Queen exits a sixth-place finish in the Prix de Sandringham (G2) on June 5 at Chantilly. The daughter of Recorder won her 3-year-old debut in the Listed Prix la Camargo in March at Saint-Cloud ahead of a third in the Prix Vanteaux, when finishing behind Know Thyself.

French jockey Stephane Pasquier, who guided Karakontie to a 2014 Breeders’ Cup Mile score, will pilot Hot Queen from post No. 7.

Trainer Brendan Walsh sends up Marc Detampel’s New Year’s Eve, who has won 3-of-4 career starts. The Kitten’s Joy filly was an upset 14-1 winner of the Edgewood (G2) on May 6 at Churchill Downs last out, where she sported blinkers for the first time.

Luis Saez, a nine-time stakes-winner this meet, has the return call from post No. 6.

Completing the field is David Bernsen and Schroeder Farms’ California chipper Cairo Memories for trainer Bob Hess, Jr., who arrives at the Belmont Oaks off two Grade 3 triumphs over the Santa Anita turf in the April 9 Providencia and the May 29 Honeymoon. Both wins were at nine furlongs under Hall of Famer Mike Smith, who will ride from post No. 2.

Inaugurated in 1979 and raced as the Rare Perfume until 1998, and subsequently the Garden City Handicap until 2014, the Belmont Oaks has had multiple winners go on to earn championship honors in their careers. Personal Ensign (1987) and Sky Beauty (1993) captured this race when it was contested on dirt en route to their stellar careers. When contested on grass, the race has been won by memorable turf distaffers Perfect Sting (1999), Voodoo Dancer (2001), Wonder Again (2002), Winter Memories (2011) and Lady Eli (2015).