Belmont Oaks Invitational 2020: Who can beat the favorite? 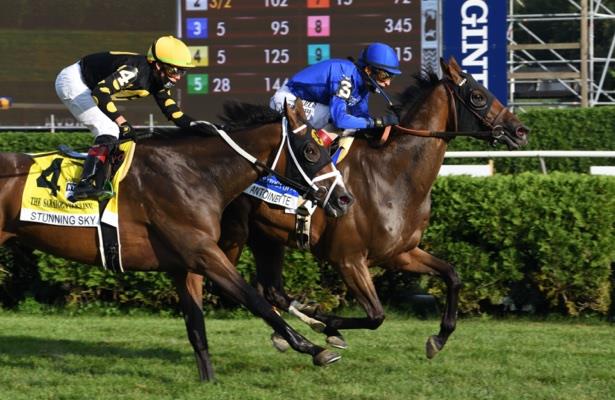 The field includes two European-breds with Group 3 victories in France, a stakes winner from Saratoga, an allowance winner, and a Todd Pletcher runner with only a maiden score.

The Belmont Oaks is carded as race 5 out of 10 with post time scheduled for 3:04 p.m. ET. Here is a full-field analysis with morning line odds from the Horse Racing Nation staff.

1) Setting the Mood [ML 8-1 – Lea – T. Pletcher/L. Saez – 5: 1-3-0 - $61,380] This daughter of Lea will make her stakes debut in the Grade 1 Belmont Oaks for Todd Pletcher after a pair of second place finishes in allowance races at Belmont Park and most recently at Saratoga. Going 11 furlongs at the Spa, she set the pace and then lost a stretch duel by a head. Toss.

2) Magic Attitude (GB) [ML 2-1 – Galileo (IRE) – A. Delacour/J. Castellano – 6: 2-1-1 - $107,937] Magic Attitude will get Lasix for the first time in her American debut for Lael Stable, the owners of Barbaro, and trainer Arnaud Delacour. The daughter of the acclaimed Irish stallion Galileo raced in France, where she won a Group 3 at Longchamp and finished second in a Group 1. Her last race was a fifth place in a Group 1 in July. Since then, she has been training at the Fair Hills barn of Delacour. Her running lines indicate that she did her best running while on the lead. Win Contender.

3) Key Biscayne [ML 10-1 – Brethen – Juan Alvarado/M. Franco – 10: 2-2-2 - $152,120] This Florida-bred spent the summer at Saratoga, where she was third in the Saratoga Oaks and fourth in the Lake Placid (G2). She broke her maiden in her sixth try against state-breds at Gulfstream Park in May and then came right back to beat a restricted allowance field at the Florida track. Toss.

5) Antoinette [ML 7-5 – Hard Spun – B. Mott/J. Velazquez – 8: 3-0-4 - $483,750] This Godolphin homebred was last seen in August winning the Saratoga Oaks on the front end. Hall of Fame trainer Bill Mott often moves his horses between turf and dirt, and Antoinette has run well on both. She was third in the Coaching Club American Oaks (G1) at the Spa, and before that she was third in the Wonder Again (G3) on the grass. Kentucky Derby winning jockey John Velazquez stays on board and likely will try to win this Grade 1 on the lead. Top Choice.

Summary: This small field comes down to a matchup between the likely favorite Antoinette and a pair of Euro-bred runners who raced against quality fields in France.

Antoinette appears to a have a significant pace advantage, and regular rider Johnny V. knows how to parcel out speed on the turf as well as any jockey. Magic Attitude and Neige Blanche, who both won Group 3 races in France, will have to try to stay close to the pace setter.