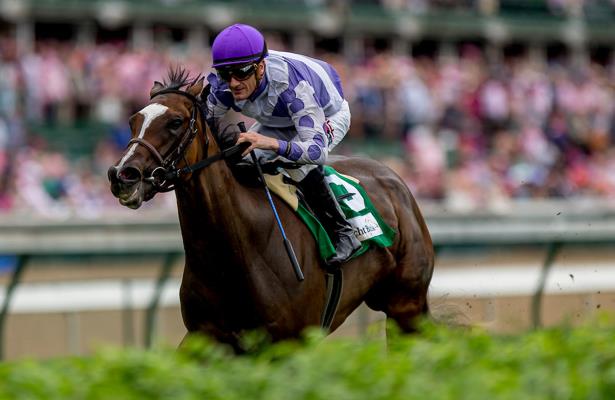 Saturday's Grade 1, $750,000 Belmont Oaks Invitational is restricted to 3-year-old fillies, of which nine signed on to run, and goes at 1 1/4 miles on the inner turf course at Belmont Park.

The Oaks is also the first leg of the newly created Turf Tiara, with the series continuing on Friday, August 2, at Saratoga with the inaugural Saratoga Oaks at 1 3/16-miles. The final jewel of the three is the first-ever Jockey Club Oaks slated for September 7 at Belmont Park. It measures 1 3/8-miles.

The Oaks, which has attracted an international field of nine fillies, is slated as race 7 out of 10 on Saturday’s Stars and Stripes Racing Festival card with post time scheduled for 4:30 p.m. ET. Here is a full-field analysis with morning line odds provided by Horse Racing Nation.

Olendon (FR) [ML 7-2 – Le Havre (FR) – P. Bary/J. Velazquez – 6: 2-1-0 - $116,111] Clearly, this is the best of the European fillies. The French-bred was beaten by just one-length in a Group 1 at Longchamp last time out while racing Saturday's mile and a quarter distance. Her last two performances were excellent, but both came on soft turf courses. A firm Belmont turf course would be a new challenge for her. Win contender.

Newspaperofrecord (IRE) [ML 3-1 – Lope de Vega (IRE) – C. Brown/I. Ortiz Jr. – 5: 3-2-0 - $795,750] The first of the Chad Brown runners was the superstar turf filly of 2018. This year she has been a headstrong frontrunner who has not been able to sustain her speed. Since her two defeats, Brown has been training her behind horses while trying to get her to rate and relax. And that's the key for Newspaperofrecord. If she can relax, she will be dangerous, but her chances to handle 10 furlongs are otherwise slim. She is the biggest question mark in the race. Threat to win.

Coral Beach (IRE) [ML 15-1 – Zoffany – A. O’Brien/M. Hussey – 16: 2-3-4 - $74,986] The first of two from the powerful barn of the Irish superstar trainer Aiden O’Brien. You do a double take when you look at the career record of this Irish-bred filly given 16 career starts. All of those races have produced only two wins and just $74,986 in earnings. Considering the fact that she needed 10 starts to break her maiden, it might be easy to toss her from consideration. However, a recent fourth-place finish in a field of 28 at Royal Ascot is worth considering. Use underneath.

Concrete Rose [ML 2-1 – Twirling Candy – G. Arnold II/J. Leparoux – 5: 4-0-0 - $418,650] Concrete Rose has been an impressive turf runner since her debut victory on the turf last summer at Saratoga. From there it was a steady diet of graded stakes races with three convincing victories coming on turf that was firm and good. Her lone defeat came in a non-effort on less than firm going in the Breeders’ Cup Juvenile Fillies Turf. Against this field of Americans and Euros, she is the horse to beat. Top Choice.

Café Americano [ML 10-1– Medaglia d’Oro – C. Brown/J. Castellano – 2: 2-0-0 - $70,900] The second of three in the field from the barn of Chad Brown, this lightly raced daughter of Medaglia d’Oro is unbeaten in two career starts. She was last seen winning an allowance at Belmont Park from a stalking position, but this $625,000 yearling purchase would have to make a huge jump up in class to win this Grade 1 stakes. Use in trifecta.

Just Wonderful [ML 10-1 – Dansili (GB) – A. O’Brien/W. Lordan – 10: 3-0-1 - $207,233] This is the better of the two Aidan O’Brien fillies sporting a Group 2 win at Newmarket and a fourth in the Breeders’ Cup Juvenile Fillies Turf. This year she has run against only Group 1 competition, including an eighth at Royal Ascot -- which means she will have to ship across the Atlantic on short rest. A mile is the farthest that she has run in her career. Use underneath.

Jodie (JPN) [ML 12-1 – Dalwa Major (JPN) – H. Toda/M. Muto – 9: 2-0-2 - $440,530] It's most difficult to evaluate the quality of the horses that come from Japan. This one shows more than $400,000 in earnings with just two wins. Her career includes a maiden victory and a win in a non-graded stakes race. She is one of only two fillies in the field who have run the distance previously. In the end, I just can’t find any reasons to believe that she can contend. Toss.

Cambier Parc [ML 8-1 – Medaglia d’Oro – C. Brown/J. Ortiz – 5: 3-0-0 - $242,460] The third of Chad Brown's charges is the recent winner of the Wonder Again (G3) at Belmont, where she defeated Newpaperofrecord. As another daughter of Medaglia d’Oro, she has won three of five career starts while employing a stalking running style. Live longshot.

Summary: Here are a few bits of information that are worth keeping in my when you handicap the Oaks.

• Recently, the firmer the Belmont turf courses, the more speed-favoring they have become.

• Although O’Brien wins Grade 1 races all over the world with his impeccably bred horses, most of his success in the America has come in the Breeders’ Cup. He has not done nearly as well shipping into New York, with a victory in this race a year ago an exception.

• Olendon and Jodie are the only two fillies in the race to have already gone the 10-furlong trip.