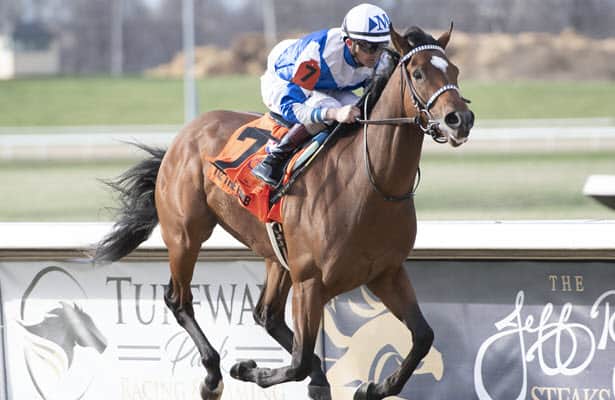 Runners from the biggest derbies on both sides of the Atlantic collide Saturday with victory in another derby on the line.

Thirteen sophomores are entered for the Belmont Derby, which features a mix of familiar domestic names and international shippers running for well-renowned connections.

Two U.S. hopes are Kentucky Derby participants Tiz the Bomb (6-1) and Classic Causeway (12-1), both of whom are trained by Kenny McPeek.

Tiz the Bomb returns for the first time since settling for ninth place May 7 at Churchill Downs. Jockey Dylan Davis will be up on the Hit It a Bomb colt.

While Tiz the Bomb missed the board on the first Saturday in May, he switches to a surface on which he has enjoyed success. His prior races over the lawn include a Bourbon Stakes (G2) win last October at Keeneland and a runner-up effort one month later at Del Mar in the Breeders’ Cup Juvenile Turf.

Tampa Bay Derby (G2) hero Classic Causeway finished 11th in the Kentucky Derby for former trainer Brian Lynch. He crossed third June 25 at Thistledown in the Ohio Derby (G3), his first start for McPeek, and returns in two weeks for this race.

Three of the European runners, Stone Age, Nations Pride (5-1) and Royal Patronage (12-1), exit the Epsom Derby (G1), the middle jewel of the English Triple Crown. They finished sixth, eighth and 16th, respectively, in that event.

Coolmore connections campaign Stone Age, a Group 3 winner in the U.K. His trainer, Aidan O’Brien, and jockey, Ryan Moore, teamed up to win the 2021 Belmont Derby with Bolshoi Ballet.

The Godolphin homebred Nations Pride is a U.K. stakes winner who runs for Charlie Appleby. That trainer won eight Grade 1 events last season in North America, including three in the Breeders’ Cup, and aims for his first such win of 2022.

Here is a look at the field for the 2022 Belmont Derby Invitational (trainer and jockey in parentheses) with morning-line odds:

Due to the plethora of international runners making North American debuts, TimeformUS does not have enough data to make a Pace Projection for the Belmont Derby.

Super Screener landed on Nations Pride, who is 5-1 on the Belmont Derby morning line, as both its "most reliable board hitter" and "top value."

Trainer Kenny McPeek is not afraid of bringing his horses back on short rest to race again, including Belmont Derby starter Classic Causeway. McPeek offered more info on his runners this week on the Ron Flatter Racing Pod.

McPeek’s Belmont Derby pair of Classic Causeway and Tiz the Bomb are two of nine Kentucky Derby alumni racing this weekend. Suburban Stakes (G2) starters Dynamic One and Max Player are among the others.

Trainer Graham Motion chose this spring to point Sy Dog toward the Belmont Derby but said, “every time I look up, it seems like that race is getting increasingly more difficult. So now I’m kind of second-guessing myself but he’s doing well, and I’m sure he’ll appreciate the distance.”

Here is a look at other stakes races of note taking place Saturday across the U.S. All post times are EDT.

Dynamic One (7-5) aims to make the grade Saturday for trainer Todd Pletcher after winning the Blame Stakes on June 4 at Churchill Downs. Jockey Irad Ortiz Jr. will be up on the 4-year-old Union Rags colt, 18th-place runner in the 2021 Kentucky Derby. Shug McGaughey trains First Captain (8-5), winner of the Pimlico Special Stakes (G3) on May 20 and the Dwyer Stakes (G3) last June at Belmont. Untreated (3-1), twice an Aqueduct allowance winner, crossed third in the Pimlico Special for Pletcher.

Related: Horses to Watch: 1 to follow and 5 in this week's entries | Barn Tour: McGaughey stays patient with First Captain

Temple City Terror (3-1), third-place finisher in this event last July, aims to do two better Saturday for trainer Brendan Walsh. Jockey Umberto Rispoli gets the call on the 6-year-old Temple City mare, who took Churchill’s Keertana Overnight Stakes on May 28. Rusty Arnold trains Stand Tall (4-1), who was second in the Keertana and starts outside of Kentucky for only the second time in her 15th start. La Lune (5-1), a Group 3 heroine in the U.K., followed Temple City Terror and Stand Tall home for a third-place Keertana finish for trainer Edward Vaughan.

Miss Leslie (2-1) has won back-to-back stakes for trainer Claudio Gonzalez, including Delaware’s Obeah Stakes on June 8. Jockey Angel Cruz will get a leg up on the 4-year-old Paynter filly carrying 121 pounds Saturday, four more than any of her rivals. Rob Atras trains Battle Bling (3-1), an Aqueduct stakes victor who was second in the Obeah. Microcap (4-1) returns for trainer Grant Forster off a fourth-place finish June 25 at Thistledown in the Lady Jacqueline Stakes.

Concert Hall (3-1) makes her North American debut for trainer Aidan O’Brien off a fourth-place effort June 26 at the Curragh in the Pretty Polly Stakes (G1). Jockey Ryan Moore flies into Belmont to ride the Dubawi filly, a Group 3 winner. Chad Brown trains Haughty (5-1), winner of the Penn Oaks in her 3-year-old bow June 3 at Penn National. Consumer Spending (5-1) enters off back-to-back scores for Brown, including in the local Wonder Again Stakes (G2) on June 9.

Pretty Birdie (2-1) started her career 2-for-2, including a Schuylerville Stakes (G3) win last July at Saratoga, but is 1-for-5 since for trainer Norm Casse. Jockey Joel Rosario gets the call on the Bird Song filly, runner-up June 12 at Churchill in the Leslie's Lady Overnight Stakes. Todd Fincher trains Smash Ticket (5-2), who ships to New York after winning a May 30 allowance race at Lone Star by 11 lengths. Happy Soul (3-1) was runner-up for trainer Wesley Ward on May 20 at Pimlico in the Miss Preakness Stakes (G3).

Related: Video: How to play the Indiana Derby all-stakes Pick 5 | Florent Geroux will ride at Del Mar this summer

Rattle N Roll (5-2), like fellow McPeek trainee Runaway Wife, wheels back one weekend after running at Churchill. Jockey Brian Hernandez Jr. will pilot the Connect colt, a Grade 1 winner who took the American Derby last Saturday under the Twin Spires. Michael McCarthy trains Actuator (7-2), who graduated on third asking June 8 at Churchill and has two previous races at Horseshoe Indy. Best Actor (4-1) is unbeaten in two starts for Cox, including a June 12 allowance event at Churchill.

Slow Down Andy (8-5) already owns a local graded-stakes score, winning the Los Alamitos Futurity (G2) last December for trainer Doug O’Neill. Jockey Mario Gutierrez gets the call on the Nyquist colt, who returns from a layoff dating to a Sunland Park Derby (G3) win March 27. Bob Baffert, who recently returned from a 90-day suspension, trains Doppelganger (2-1), third-place finisher June 11 at Santa Anita in the Affirmed Stakes (G3). High Connection (2-1) was runner-up in the Affirmed when under the care of trainer Sean McCarthy and runs Saturday for Baffert.

Candy Raid (5-2), who is cross-entered in the Indiana Oaks, is the shortest price on the morning line for Desormeaux and jockey James Graham. The Candy Ride filly finished ninth two starts back in Churchill’s Kentucky Oaks on May 6. Chasey Pomier trains six-time stakes winner Free Like a Girl (3-1), who travels north off a Louisiana Legends Soiree Stakes score June 4 at Evangeline. Falconet (7-2) makes her stakes bow for Pletcher off a Churchill allowance triumph June 3.

Related: Locals are happy to take on big guys in 'other' derbies | Track Trends: Are favorites vulnerable in weekend derbies?

Warrant (8-5) leads the way for three-time Cornhusker-winning trainer Cox, who saddled 2021 Horse of the Year Knicks Go to a win last July in this event. Jockey Ricardo Santana Jr. gets the call on the 4-year-old Constitution colt, a Grade 3 winner who runner-up June 11 on the Belmont Stakes undercard in the 1 1/2-mile Brooklyn Stakes (G2). Steve Asmussen trains Grade 2 victor Silver Prospector (5-2), who snapped a nine-race losing streak May 30 at Lone Star by winning the Steve Sexton Mile Stakes (G3). Rated R Superstar (3-1), three times a Grade 3 hero, makes career start No. 62 here for trainer Federico Villafranco off a fifth-place effort in the Sexton Mile.