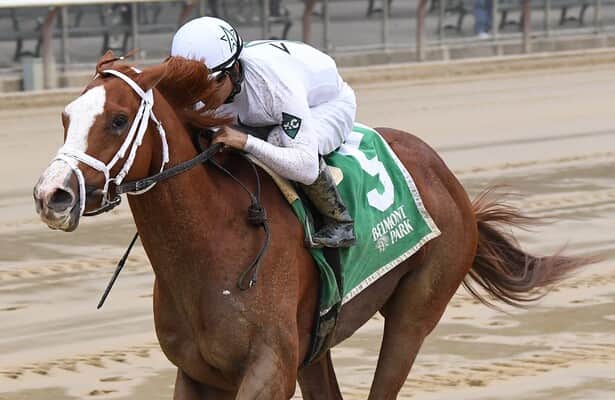 A sophomore son of Constitution bred by Fred W. Hertrich III and John D. Fielding, Americanrevolution completed a hat trick of wins in August with an impressive five-length win in the nine-furlong Albany on New York Showcase Day at Saratoga.

The talented chestnut entered Saturday’s test from a third-place finish in the Pennsylvania Derby (G1) on Sept. 25 at Parx. He made his return to state-bred company a winning one with a convincing 11 3/4-length score in the nine-furlong event for 3-year-olds and up which was contested over a sloppy and sealed main track in race 9.

Sea Foam, winner of the Evan Shipman in August at the Spa, led the field through splits of 22.85 and 45.84 seconds with two-time Empire Classic winner Mr. Buff tracking in second and Americanrevolution outside rivals and clear in third. Americanrevolution advanced at will through the turn, overtaking Sea Foam at the head of the lane and powered home to a visually impressive score in 1:49.11.

Americanrevolution graduated at second asking sprinting six furlongs against older company over Big Sandy on June 20 and followed with a romping 7 1/4-length score in the New York Derby at Finger Lakes ahead of his Albany coup. A $275,000 purchase at the Fasig-Tipton Saratoga Preferred New York-bred Sale, Americanrevolution is out of the Super Saver mare Polly Freeze. Sent to post as the 2-5 mutuel favorite, Americanrevolution paid $2.90 for a $2 win bet.

Elliott Walden, president and CEO of WinStar Farm, said the Constitution chestnut has proven to be among the elite sophomores currently in training.

"He’s a very nice horse. I think he’s probably the ninth- or 10th-best 3-year-old in the country right now," Walden said. "Some of the better ones are retiring after this year so if he comes back well, who knows how it goes next year. He’s certainly done nothing wrong, and I’m very excited of what’s ahead for him.”

“He's come a long way in a short period of time," Pletcher said. "He's a talented horse and showed last time that he belongs with some of the better 3-year-olds in the country, so it was great to have an opportunity like he had today.”

Barry Schwartz’s Sharp Starr made a triumphant return to stakes company, rallying from last-of-10 to post a 3 1/4-length victory in the $250,000 Empire Distaff for fillies and mares 3-years-old and up going 1 1/16 miles in race 8.

The 4-year-old Munnings filly, who won the Go for Wand (G3) to cap her sophomore season in December at the Big A, looked fresh in her first start in more than two months, overtaking Make Mischief at the top of the stretch and powering home a winner in a 1:44.23 final time for trainer Horacio DePaz.

Sharp Starr, off at 16-1, was put under a hold by Jose Ortiz as Trinni Luck led the field through the opening quarter in 23.19 seconds, the half in 46.62 seconds and three-quarters in 1:10.91. Ortiz utilized a ground-saving trip before tipping Sharp Starr out entering the turn. With Make Mischief overtaking the tiring pacesetter, Sharp Starr took aim at her rival and overtook her in the stretch to register her first win in five starts this year. Sharp Starr, bred by Stonewell Farm, returned $34.40 in improving to 14: 4-3-3 while increasing her career bankroll to $224,545.

DePaz said Sharp Starr could look to defend her title in the one-mile Go for Wand (G3) on Dec. 4 at Aqueduct.

“It’s definitely a possibility,” DePaz. “She handled the mile and a sixteenth fine here, so we’ll see what her perfect distance will be. We’ll keep that race under consideration.”

Iris Smith Stable’s Shipsational kicked off the stakes action on Empire Showcase Day by fending off 4-5 favorite Overstep’s re-rally effort to win the $250,000 Sleepy Hollow for juveniles contesting a one-turn mile in race 3.

The Edward Barker-trained Shipsational, who captured the Bertram F. Bongard on Sept. 26 at Belmont, notched his second consecutive stakes win by leading the six-horse field through an opening quarter-mile in 24.09 seconds, the half in 47.74 seconds and three-quarters in 1:12.45 over a sloppy and sealed track.

Entering the stretch, Saez kept 6-5 Shipsational to task, repelling Overstep’s bid from the outside under Irad Ortiz Jr. to post a half-length victory, completing the course in a final time of 1:38.32 while paying $4.60 on a $2 win bet. Following Overstep was Who Hoo That’s Me, Sterling Hill, Excursionniste and Sundaeswithsandy completing the order of finish.

Shipsational, now 3-for-4 to start his career, could now target the 1 1/8-mile Remsen (G2) on Dec. 4 at Aqueduct. Barker said he is looking forward to trying the Midshipman colt, bred by Mr. and Mrs. Bertram R. Firestone, around two turns for the first time in a race that offers 10-4-2-1 qualifying points to the 2022 Kentucky Derby.

Owned by John Fanelli, Cash is King, LC Racing and Paul Braverman, trained by Saffie Joseph Jr. and piloted by Irad Ortiz Jr., the 4-year-old Cross Traffic gray, bred by Brian Culnan, returned from a two-month layoff with vigor, taking over from pacesetter Foolish Ghost at the top of the lane and powering home in a final time of 1:17.51. The late-running Chestertown, who advanced up the rail through the turn before angling out for the stretch run, completed the exacta. Jemography, Foolish Ghost, Amundson, Our Last Buck, Judge N Jury and Bronx Bomber rounded out the order of finish. Kaz’s Beach was scratched.

"He won well. The slop was a bit of a concern, but he had trained really well into this race and ran good," Joseph said. "It seems like one-turn is what he wants to do. I think we'll give the Cigar Mile a shot."

Bloom Racing Stable homebred The Important One broke sharply and led the six-horse field gate-to-wire to notch her first career stakes win by posting a 6 1/4-length score in the $150,000 Iroquois for fillies and mares 3-years-old and up sprinting 6 1/2 furlongs in race 6.

Trained by Hall of Famer Steve Asmussen, The Important One was sent to the front from post 2 under jockey Jose Lezcano, posting an opening quarter-mile in 23.04 with the half in 45.70. In the stretch, the 4-year-old Majestic City filly drew away from runner-up Miss Jimmy, hitting the wire in 1:18.03. The Important One, making her first stakes appearance in eight starts, ran her win streak to three while improving to 13: 5-0-3 for purse earnings to $278,190.

The Important One, one of three horses in the race off at 2-1, returned $6.20. Completing the order of finish behind Miss Jimmy was slight favorite Espresso Shot, Hannah Dances, Fight On Lucy and Letmetakethiscall.

Maid of the Mist

NY Final Furlong Racing Stable and Parkland Thoroughbreds' Venti Valentine, trained by Jorge Abreu with Ortiz Jr. up, made her stakes debut a winning one in the $250,000 Maid of the Mist, a one-turn mile for juvenile fillies in race 7.

Sandy's Garden set splits of 23.24 and 46.68 seconds under pressure from Sue Ellen Mishkin as Venti Valentine, who broke a step slow, saved ground in third. Ortiz, Jr. gave Venti Valentine her cue through the turn, advancing with purpose and finding racing room outside the tiring Sandy's Garden as the field straightened away. Once presented, the Firing Line chestnut, bred by Final Furlong Racing Stable and Maspeth Stable, drew off impressively to win by 3 3/4-lengths in a final time of 1:39.78. Captainsdaughter rallied from far back to complete the exacta.

Dufresne, Velvet Sister, Classic Lynne, Sandy's Garden, Vallelujah, and Sue Ellen Mishkin rounded out the order of finish. Luz was pulled up in the stretch run and vanned off. Starship Laoban was scratched.

The special 10-race card devoted to horses bred in the Empire State boasted six stakes worth a combined $1.35 million.

“Today’s Empire Showcase Day was a prime example of the success and integral role the New York-bred program has in the thoroughbred racing industry,” said Najja Thompson, Executive Director of New York Thoroughbred Breeders, Inc. “Each of our three annual showcase days highlight the quality of talent being produced by the breeders of our state and the opportunities available in incentives for breeders, along with exceptional purses for owners and horsemen.”

Due to significant rainfall from a coastal storm that impacted Long Island Tuesday and Wednesday, a pair of $200,000 state-bred turf races originally scheduled for Saturday - the Ticonderoga for fillies and mares 3-years-old and up, and the Mohawk for 3-year-olds and up – have been rescheduled for Friday, November 5 and Saturday, November 6, respectively.