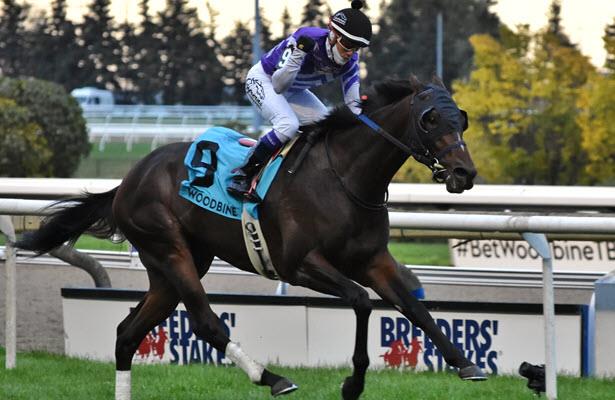 Belichick broke his maiden in grand fashion on Saturday when rolling to victory in the $400,000 Breeders' Stakes at Woodbine to deny stablemate Mighty Heart's bid for a Canadian Triple Crown.

Mighty Heart, who was vying to become Canada's 13th Triple Crown winner following wins in the Queen's Plate and Prince of Wales for trainer Josie Carroll, broke sharply under Daisuke Fukumoto to grab the early lead in the 1 1/2-miles Breeders'. With 99-1 shot Kunal pressing on the outside, Mighty Heart took the field through sharp opening fractions of 23.69 and 47.45 on good turf.

As the pair continued to lead a strung-out field down the backstretch through six furlongs in 1:13.02, Belichick and Luis Contreras began to steadily make up ground off the rail to draw into contention. On the far turn, Mighty Heart started to tire as Belichick came widest of all to range up to the leaders.

From there it was all Belichick, as he accelerated through the stretch to draw away and cross the wire a four-length winner. Mighty Heart faded to seventh.

Meyer -- a 50-1 shot -- checked in a distant second and was followed across the wire by English Conqueror and Deviant. Final time was 2:32.51.

Owned by NK Racing and LNJ Foxwoods, Belichick paid $8.70 as the second choice.

After the race, Fukumoto and Carroll both noted the sharp early pace proved the downfall for Mighty Heart, who was trying to become the first Canadian Triple Crown winner since Wando in 2003.

“Today he broke good and I didn’t plan on going to the front," Fukumoto said. "He was sharp like in the Queen’s Plate, I tried to take hold and he relaxed a little bit in the backstretch, but with the mile and a half you need the stamina. I think he just got tired."

"He tried hard today, I tried to take hold too…but that’s racing," Fukumoto continued. "He gave me many experiences and I’m so proud of him. I want everyone to keep following him when he runs again next time.”

Added Carroll, “I told him [Fukumoto], ‘Let’s see how this falls out. If you make the lead, watch your fractions…it’s a long, long race.’ The horse broke well, he found himself up there, unfortunately another horse dogged him the whole way and he couldn’t get the horse to come off the bridle and relax.”

Belichick had been winless in three prior starts, including a distant second most recently to Mighty Heart in the Sept. 12 Queen's Plate on synthetic. A $300,000 auction purchase, the son of Lemon Drop Kid was third on debut at Woodbine on turf July 24 and came back to be second against maidens on synthetic prior to the Queen's Plate.

Carroll added she was not surprised by Saturday's result, noting the extra time Belichick received by skipping the Prince of Wales.

“I’ve said from the very start that Belichick is a very, very special horse that’s just coming into his own and I think he showed that today. He’s a powerful horse," Carroll said. "The Queen’s Plate was a breakout race for him and we couldn’t come back that quickly in the Prince of Wales. A horse needs a little time to regroup from something like that, a young, inexperienced horse. And regroup he did.”