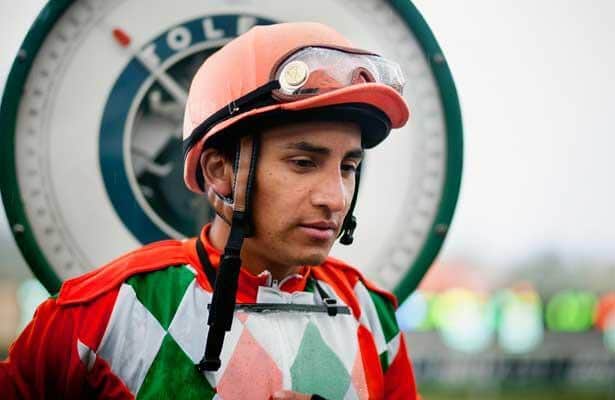 If there was any question about Rafael Bejarano winning his third straight riding title, it was answered Sunday when the native of Peru won six times from eight mounts.

The outburst gave Bejarano 40 wins through 34 days of the meeting and allowed him to build an 11-win margin over Kent Desormeaux and 12 over Elvis Trujillo with two racing days and 21 races to the conclusion.

Bejarano became the fifth jockey in Del Mar history to win six races in a day. Bill Shoemaker did it in 1954, Laffit Pincay, Jr. twice, in 1976 and ’78, and Rudy Rosales in 1969. The all-time record holder is Victor Espinoza who won seven races on Labor Day, September 4, 2006.

Bejarano, 32, returned to riding on opening day of the meeting after more than two months away while healing from a broken collar bone, ribs and shoulder blades in a a May 10 spill at Santa Anita.

After a slow start he steadily moved up the jockey standings. Bejarano was tied with Desormeaux for the lead with 22 wins each on August 20, assumed a 23-22 lead on August 21 and built his advantage to 34-28 entering Sunday’s program.

“When I was down and then came back, I’d lost a lot of my good mounts. Now I’m good to go again.”

Bejarano’s six wins came a day after he notched four and raised his total to 10 wins from 16 mounts through the first two days of the Labor Day Weekend. He is booked to ride nine of the 11 races Monday. Two of his mounts are morning line favorites.