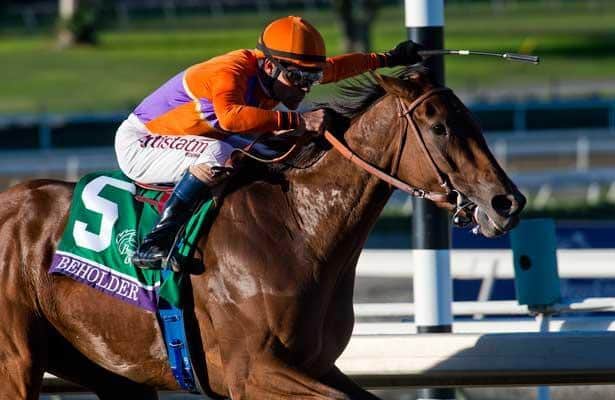 Trained by Richard Mandella and owned by B. Wayne Hughes’ Spendthrift Farm, Beholder is in search of her fourth consecutive win as she preps for the Grade I, $1 million Ogden Phipps at 1 1/16 miles on June 7 at Belmont Park.

“We were looking for a race to get her started and we felt this would be a good prep for the million dollar race on Belmont Day,” said Mandella.  “Adding it up, we just didn’t want to ship out of town for her first race back.  I don’t feel she’s wound up as tight as she might be, but it should be good enough for now.”

A supplemental entrant at a cost of $1,500, the 4-year-old filly by Henny Hughes is in search of her fourth consecutive win and her ninth overall from 13 starts.  A winner of the Grade I, $2 million Breeders’ Cup Juvenile Fillies at Santa Anita in 2012, she was America’s Eclipse Award winning 2-year-old filly and she was voted Eclipse Champion 3-year-old filly for 2013.  She has career earnings of $3,075,000 and will be ridden for the fourth time in-a-row by Gary Stevens.

A filly blessed with tremendous speed, Beholder, dating back to Feb. 26, has eight works on her Santa Anita tab, including two consecutive seven furlong moves, the most recent in 1:27.60 on April 12.

Lightly raced Eblouissante, the much-heralded half sister to legendary Zenyatta, has been idle since running second as the 3-5 favorite in a second condition allowance going 1 1/16 miles and will try stakes competition for the second time in her fifth overall start.  A 5-year-old mare by Bernardini, won her first two races; a maiden special weight on Nov. 16, 2012 at Hollywood Park and a first condition allowance at Santa Anita on Jan. 17, 2013, both at 1 1/16 miles.

Like Zenyatta, she is trained by John Shirreffs and will be ridden for the second time in-a-row by Mike Smith.  Owned by St. George Farm Racing, LLC, she is 4-2-1-0 with earnings of $77,800.