Beauty and the Bullring 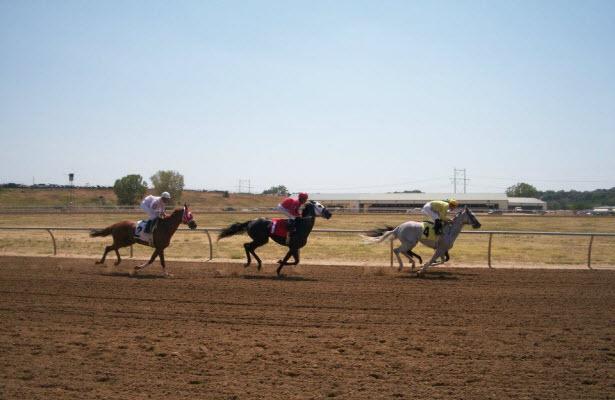 It is around these first frigid days of the year that I long to go to the track.  That desire does not sit well for someone who lives two hours away from the nearest major racing facility.  I have no Churchill Downs, Aqueduct or Hollywood Park.  All that remains of Omaha's once-booming racing industry is a tiny track and its simulcasting facility.

But for a few spring or summer days out of the year, the area around 63rd and Q Street comes alive.

Some horsemen choose to stay inside the dim hustle-bustle of the simulcasting center, but most people step into the bright sun, surrounded by a thick crowd of people.  The scent of grilled foods immediately reaches your nose; the Sons of Italy always have a stand for their sensational Italian sausage sandwiches.  Under a white canopy, flapping in the breeze, bands play for the shade-seeking audience assembled.  Sometimes they might play original songs, but I've only ever heard '80s standards.

Admission is free, and racing programs are no more than a couple bucks.  This ushers in an extraordinary variety of people, from casual observers to hardened horseplayers to eager children.  Yet all three of these kinds of people exhibit the same behavior as the horses come down the stretch, their hands clutching the fence and their voices high with frenzied excitement.

The racing is simple as it can get.  The track is a far cry from Belmont's vast oval; it is only five furlongs around - a "bullring," in racing lingo.  Distances besides six furlongs and a mile are rare, as these two provide the best possible starting place for the horses.  Instead of owner's silks, which are only displayed in the biggest race of the meet, jockeys are clad in the plain colors of their mounts' saddlecloths.  The paddock is a dusty feature reminiscent of a Western corral, but many like to congregate there to see the horses up close.  Children happily pet lead ponies on their bristly noses.

I think I can safely say that my time spent at Horsemen's Park as a younger child fueled my tendency to be a railbird at any track I go to.  The feeling you get when those horses rush by you - so close - is out of this world.  Your heartbeats echo the beats of their hooves; their movement tosses the summer wind into your face.  The cacophony of sound as the horses reach the finish line travels high and far.  A few blocks down on busy 72nd Street, you can still feel the excitement in the air, like some sort of electric current.

Familiar faces can be found at Horsemen's - friends, family, neighbors - even in the crowd of as many as 10,000 packing into the tiny track.  The more well-to-do relax in the clubhouse, while others attempt to snatch the best seats in the grandstand (the seats with shade, of course!).  Even people well known to racing fans around the country have made appearances.  Jack Van Berg, best known as the trainer of 1988 Horse of the Year Alysheba, is often around, as he called old Ak-Sar-Ben home for several decades.  Above all, the cheerful voice of Terry Wallace booms over the crowd; Wallace's most famous gig was, of course, the long-time announcer for Oaklawn Park.

Small-scale racing is held under scrutiny by many in the industry.  The small purses and slow race times cannot possibly compare to the grandiose spectacle of a Saratoga or a Santa Anita.  But bullrings like Horsemen's Park are where the little guys can have a say in things; where underachieving sons and daughters of Tapit or Distorted Humor can succeed; where the community can gather in a tiny setting to enjoy food, music, and gambling.

The basic soul of racing - a soul that we've all fallen in love with - remains even in its lowest levels.

A man stood next to me at the rail once, whooping and cheering as his horse flew home in front.  His face split in a wide grin and his shaking hands clutching a winning ticket, he turned to his friend and said, "This is so much better than going to the casino!"