Beauty Only Hopes to Upset Able Friend in Stewards' Cup 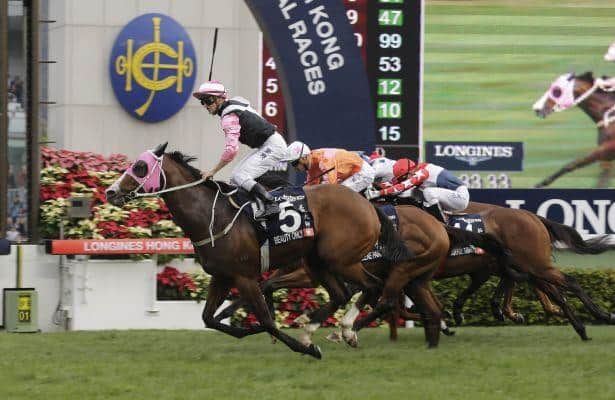 Beauty Only’s storming stretch run to win last month’s G1 LONGINES Hong Kong Mile might have announced the gelding on the world stage but jockey Zac Purton is under no illusions as to which horse remains the Hong Kong Mile division’s big daddy, at least for now.

“If Able Friend’s at his best, he’s clearly a better horse than Beauty Only,” the Australian said this morning, Friday 27 January. Purton will team up with Beauty Only against Hong Kong’s all-time highest rated horse in Monday’s (30 January) G1 Stewards’ Cup (1600m).

The six-year-old had Able Friend back in sixth when winning the Hong Kong Mile. That was a deserved first career G1 success for the Tony Cruz-trained gelding; the Italian import had previously notched a HKG1 victory in the 2015 Hong Kong Classic Mile, a race restricted to locally-trained four-year-olds.

“I know the Moore stable is very confident with Able Friend but a lot of times when horses have injuries they can show you in the morning they’ve still got it, but under full pressure in a race they can just be found out a little bit,” Purton said.

“On International day, when the pressure was on, Able Friend came up short and from our point of view we’d hope that’s the case again on Monday.”

The Hong Kong Mile was Able Friend’s second start back from a long injury lay-off and while the Moore camp’s hopes are high that the champ is now somewhere close to his best, Purton is also hopeful that Beauty Only might improve a touch on his most recent performance.

“The firmer the track, the better Beauty Only’s going to go,” he said. “The track on International day was a little bit softer and it cut up on the inside - he didn’t like that. It wasn’t until he got out into firmer ground in the straight that he really appreciated it. The track recently has been quite firm so I think it should suit him better. In that regard, he could improve a bit on his Hong Kong Mile run.”

A field of 12 is set to go to post for the Chinese New Year race-day’s primary feature, including Hong Kong Mile place-getters Helene Paragon and Joyful Trinity, as well as Hong Kong’s Horse of the Year Werther who is due to make his first start this season.

Bubbles the best: Brett Prebble did not mince words when asked this morning about Lucky Bubbles’ chance of victory in Monday’s G2 Centenary Sprint Cup (1200m): “He’s the best sprinter in Hong Kong” said it all.

The Australian hoop, ever-present aboard Francis Lui’s stable star, would have preferred it if the speedy chestnut could have had a suitable opportunity to step out for another run after his second to Aerovelocity in the 11 December LONGINES Hong Kong Sprint (1200m).

“He needed another race to go again. He’s a lightly-raced horse, he’s fit and healthy and he had a very good preparation going into the International, it was just unfortunate we didn’t have any luck in the running.”

Prebble expects that, all things being equal, the Sebring gelding will emerge on top in a race that features all of Hong Kong’s big gun sprinters, including the re-opposing Aerovelocity, the only horse burdened with a 5lb G1 penalty.

“He’s at the top of his game,” he added. “He’s had a nice trial, he’s ticking over, his fitness is as good as it could be and he’s drawn a nice marble (gate six). It looks a good race for him.”

“The horse of Francis’ should beat him really,” he said. “Lucky Bubbles was unlucky not to beat us last time. Our horse is pretty much on trial - if he runs well enough he’ll go back to Japan (Takamatsunomiya Kinen), he just needs to have a race if we’re to go that route, he needs a run.

“He has to give five pounds to Lucky Bubbles so even if he were to beat us a couple of lengths you’d have to say it was pretty good,” O’Sullivan continued.

“He’s been ok coming into this. As he’s getting older he’s becoming a little more chilled out. He’s not quite as crazy as he used to be.”

A small but select field of eight is declared for the Centenary Sprint Cup, race four on the 11-race card. The contest also features the impressive last start winner Amazing Kids, as well as 2015 G1 Hong Kong Sprint hero Peniaphobia, Not Listenin’tome, Blizzard, Strathmore and Merion.