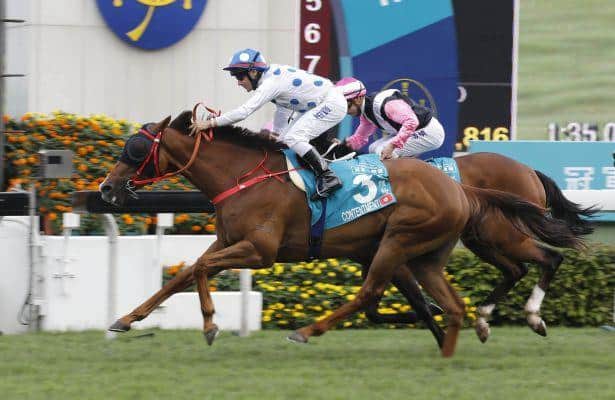 Beauty Only and Contentment will line up in Sunday’s (4 June) G1 Yasuda Kinen at Tokyo racecourse aiming to break the domestic domination that has held firm through the past 10 editions.

Since the race opened up to non-Japanese entrants in 1993, 53 foreign-trained runners from six jurisdictions have contested the early summer showcase. Three have succeeded and Bullish Luck’s score for Hong Kong in 2006 stands as the last time the home nation’s formidable defenders failed to repel the challengers. This weekend, the local contingent is expected to prevail yet again.

But the quality of Japan’s milers and that decade-stretching duration since Bullish Luck’s famous win do not faze trainer Tony Cruz: “Beauty Only can put on a big show here.” Nor do they dampen the hopes of John Size, Hong Kong’s soon-to-be nine-time champion trainer: “I’ve never left here thinking we can’t win this race.”

Cruz, the man behind Bullish Luck’s victory, has returned for a sixth attempt and December’s G1 LONGINES Hong Kong Mile hero Beauty Only is the galloper deemed fit for the challenge. Size is back for an eighth time, with recent G1 Champions Mile winner Contentment his fourth individual Yasuda Kinenaspirant.

Mention of Bullish Luck sparks Cruz into fond recollections – memories lucid despite the years since. He recalls the 2005 edition, when his greatest star, Silent Witness, attempted redemption at the mile after losing his perfect record to stablemate Bullish Luck in the preceding Champions Mile. He remembers Bullish Luck’s troubled run to fourth – one place behind Silent Witness – and subsequent recompense 12 months later.

“When Bullish Luck came the first year, with Silent Witness, I’d said to Gerald (Mosse) that I thought he could win, so Gerald flew over to ride him but he got stuck at the back of the field behind horses,” Cruz said of that reversal behind Asakusa Den’en. “When he did get out he ran on strong, but it was too late.

“So when he won his second Champions Mile the next year, we came back, and then we saw what Bullish Luck could do. He won that race, Brett Prebble rode him, and it’s not an easy race to win. It’s hard to win here in Japan.”

Cody Mo has firsthand memories of the Bullish Luck days too: “I was a work rider back then – it was 11 years ago!” he said. Now Cruz’s assistant, the Hong Kong native is Beauty Only’s regular trackwork partner and, while the top-class bay would have to step things up another notch to earn equal billing with one of Hong Kong’s all-time heroes, this morning (Friday, 2 June) Mo offered an interesting comparison.

“I’ve been to Japan with horses a couple of times before – I was here when Bullish Luck came. Beauty Only’s much more professional than Bullish Luck or Silent Witness – he’s showing me that he’s very professional.

“But,” he added, “he’s a different horse to Bullish Luck so it’s very hard to say how he compares overall. Their characters are very different.”

Mo is confident that when Sunday comes he will be handing the reins to jockey Zac Purton knowing Cruz has Beauty Only primed for the Tokyo test.

“After his last gallop yesterday (Thursday) he feels more powerful now, his energy is high and he feels good,” he said. “Normally, after a strong gallop, the horse needs a little time to settle down but afterwards, when he was walking around, he was very settled.

“He eats up everything – even in the afternoon – he drinks a lot. He only lost about 10 kilos so it’s nothing to worry about.

“I don’t feel any difference between his condition now and his condition before he won the Hong Kong Mile,” he added of Beauty Only, who enjoyed a steady canter this morning – one lap of the all-weather.

Since Bullish Luck’s win, the only foreign raiders to have attempted to win the Yasuda Kinen have been from Hong Kong – 14 horses in all, equating to 20 runners covering every year bar 2015. Size has thrown saddles over four of those, some on multiple occasions. Glorious Days had three attempts and improved with each try. Armada, though, was the first – he ran a fine second to a rare champion.

“We hadn’t really heard of Vodka before we arrived,” Size said. “Then we hear the filly had won the Derby.”

Vodka had Armada three and a half lengths adrift but it was the 16 runners behind his place-getter that gave Size confidence to keep coming back to a race that is a perfect last stop of the season for Hong Kong’s best milers, landing, as it does, a month after Sha Tin’s Champions Mile.

“He proved that we could actually compete,” Size said of Armada’s 2008 effort.

Contentment ran a below par last of 12 behind Logotype in the 2016 Yasuda Kinen but Size is hopeful that the six-year-old will have learned and matured from that experience.

“He seems to be ok,” he said. “It’s a much warmer day today so he’ll probably appreciate that. I think everything is in order.”

Contentment has drawn gate five and Beauty Only 12 in the 18-runner contest.