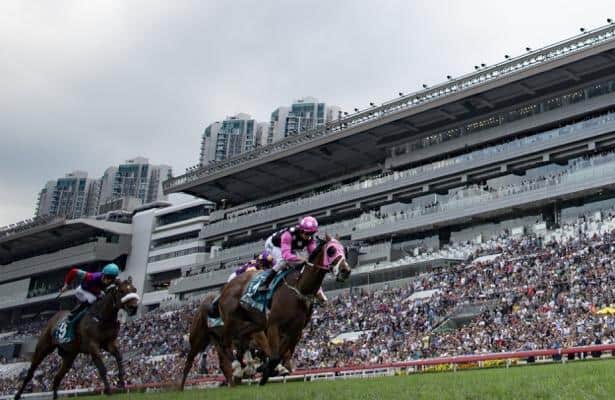 Beauty Generation claimed the Hong Kong Horse of the Year award Friday for the second year in a row at a ceremony held at the Ritz-Carlton Hotel.

John Moore’s stable star had a remarkable 2018-19 campaign in which he went unbeaten and registered a Hong Kong-record of eight wins in a season.

In addition, he set a new all-time prize money record of HK $84,770,000 and earned the equal-highest rating (127) ever achieved by a Hong Kong horse in the World’s Best Racehorse Rankings.

The Patrick Kwok-owned six-year-old also smashed the course record for 1,600 meters at Sha Tin when he had to concede weight to all other rivals in the Wealth Management Jockey Club Mile (G2).

The Champion Miler completed a clean sweep in all the Group 1 mile races this term, including going back-to-back in the big two for his division, the Hong Kong Mile and the Champions Mile. Zac Purton was in the saddle for every one of his races this term.

Meanwhile, Beauty Generation also secured the bulk of the public vote to claim the Most Popular Horse title.

The Tony Cruz-trained Exultant became the fifth horse after Indigenous, Precision, Vengeance Of Rain and Viva Pataca to be crowned both the Champion Middle-Distance Horse and the Champion Stayer in the same season.

The five-year-old Teofilo gelding proved that he too is a star of Hong Kong and world racing by winning three Group 1 races, the Hong Kong Vase, Hong Kong Gold Cup and Champions & Charter Cup.

He also won the Centenary Vase (G3) with 132 pounds on his back and was a fine second in the QEII Cup (G1).

Beat The Clock was named the season’s Champion Sprinter.

The John Size-trained five-year-old was a dual G1 victor this term, claiming the Sprint Cup and the Chairman’s Sprint Prize.

The Hinchinbrook gelding continued to be a model of consistency with two wins, two seconds and two thirds from just six starts this term, all at Group race level – he has placed in the first three in all of his 21 starts in Hong Kong.

By the same sire as Beat The Clock, Champion’s Way achieved his career highlight to date in the G3 Lion Rock Trophy, defeating seasoned gallopers to achieve a rating of 108.

That high mark meant that Champion’s Way was also named the season’s Most Improved Horse.

He started the campaign on a rating of 52 and rocketed 56 points up the rankings to end the campaign as a leading contender for next year’s 4-year-old Classic Series.

Purton sealed the Champion Jockey title for a third time and was also elected the Most Popular Jockey of the Year.

The Australian rider had a fantastic season, becoming only the second jockey to reach 1,000 wins in Hong Kong.

He also set a new single season prize money record and could yet match or better Joao Moreira’s all-time record of 170 wins in a season at the 2018-19 season finale on Sunday.

Lifetime Achievement Award, the season’s Champion Trainer award and the winner of the Tony Cruz Award for the season’s leading homegrown rider will be revealed and presented during racing at Sunday’s season finale at Sha Tin.