Beautiful Memories in good shape after pulling up in Schuylerville 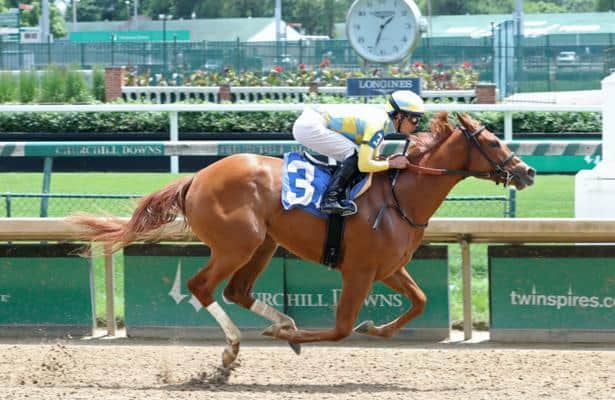 John C. Oxley's promising 2-year-old Beautiful Memories, who was pulled up by Jose Ortiz in the stretch run of her stakes debut in Wednesday's Grade 3 Schuylerville at Saratoga, was in good order on Friday morning.

Trained by Hall of Famer Mark Casse, the Hard Spun chestnut previously earned a 75 Figure in her 10-length debut romp in May at Churchill Downs. "She's good this morning. She came out of the race fine," said assistant trainer Jamie Begg. "She stumbled pretty hard out of the gate and that's probably what caused the issue. It was good of Jose to take care of her. We'll get her back to the track soon and see how she's doing."

Live Oak Plantation homebred Tap It to Win breezed a half-mile in 48.09 Monday on the Saratoga main. With Hall of Famer John Velazquez up, the Tapit ridgling romped to an impressive five-length allowance win two starts back on June 4 in which Thursday's Grade 3 Peter Pan-winner Country Grammer finished third.Tap It to Win exited the allowance win to finish fifth after setting the pace in the nine-furlong Grade 1 Belmont Stakes.

Begg said Tap It to Win will appreciate the turnback in distance next out in the Grade 1, $300,000 H. Allen Jerkens Memorial, a seven-furlong sprint for sophomores set for August 1.

"He's looking good. We're going to the Allen Jerkens with him and he should fit well in there," said Begg. "I think the cutback to seven eighths is good and we'll be able to sit off the speed and make a run."

Begg said the barn won't be afraid to try stretching out Tap It to Win if the opportunity arises.

"Everything I've heard from Johnny, the result in the Belmont had more to do with the quick turnaround than it did with him not wanting to go that far," said Begg. "That said, if he does well here we'll keep him at winning ways."

Tracy Farmer's Grade 1-winner Perfect Alibi is training at Saratoga toward a start in the Grade 1, $300,000 Longines Test, a seven-furlong sprint for sophomore fillies slated for August 8.

The dark bay daughter of Sky Mesa captured the Grade 2 Adirondack and Grade 1 Spinaway last summer at Saratoga in a memorable juvenile campaign that also included a second in the Grade 1 Darley Alcibiades at Keeneland and a fourth in the Grade 1 Breeders' Cup Juvenile Fillies at Santa Anita to close out the campaign.

Perfect Alibi was off-the-board in her belated seasonal debut on June 20 in the Grade 1 Acorn at Belmont.

"She's been here a few days now and has been galloping," said Begg. "We were going to breeze her tomorrow, but that's been pushed back now because of the rain so we might shift her work to Saturday. We're looking at the Test for her."

A maiden winner at second asking in April traveling one mile on the Gulfstream Park turf, Lashara was a closing second last out to Lake Placid-rival Cat's Pajamas in a 1 1/16-mile Belmont turf allowance on Jun 14.

Begg said the added distance should benefit the talented bay.

"It's a good spot and It's a straight 3-year-old race," said Begg. "Last time, she ran out of real estate and it's not like she was running out of gas. I think the added distance is going to suit her well. She should come with a good run."

Begg said Lashara, who is out of the graded-stakes winning Smart Strike mare Marbre Rose, demonstrated early promise but needed time to mature.

"She had a few little baby issues and it took her awhile to come around," said Begg. "She's been pretty straightforward since she started running. We just needed her to grow up."

Gary Barber's speedy French-bred Jack and Noah, last out winner of the six-furlong Sir Cat, is on target for the Grade 3, $100,000 Quick Call, a 5 ½-furlong turf sprint on July 24.

The Bated Breath grey, who boasts a record of three wins and one second from six starts, captured the six-furlong Atlantic Beach in November on the Big A turf in front-running fashion.

Last out, with Velazquez aboard in the afternoon for the first time, Jack and Noah again showed swift early foot en route to a one-length score that garnered a career-best 89 Beyer.

Jack and Noah worked a half-mile in 48.83 Monday on the Saratoga main and Begg said the colt is ready for his graded-stakes debut.

"He breezed well the other day," said Begg. "He's a horse that's real aggressive and has a lot of speed. We don't train him too hard. We just keep him happy."