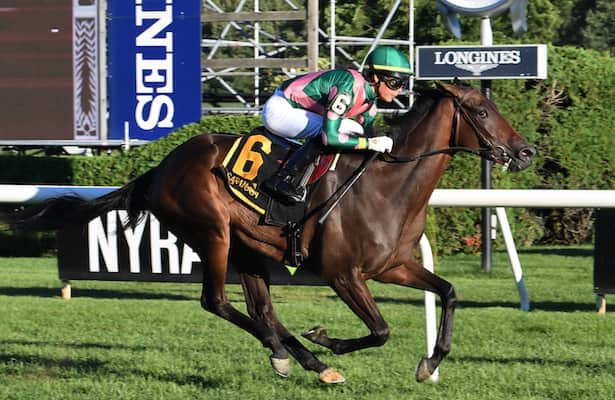 Trainer Horacio De Paz said Michael J. Ryan’s graded-stakes placed Be Your Best arrived at Keeneland on Sunday to prepare for a start in the Breeders’ Cup Juvenile Fillies Turf on Nov. 4.

The Irish-bred daughter of Muhaarar made her first two starts traveling 1 1/16-miles over the turf at Saratoga Race Course, graduating on debut with a wide trip on July 31 in a maiden special weight and following on Sept. 1 with a rail-rushing 3 3/4-length score in the P.G. Johnson.

Last out, Be Your Best finished third in the 1 1/16-mile Miss Grillo (G2) on Oct. 1 over yielding Big A turf. Sent to post as the mutuel favorite, Be Your Best tracked in fourth but was unable to make a dent in the lead of pacesetting winner Pleasant Passage and the chasing runner-up Free Look.

“Coming up the rail like that showed a lot of professionalism in her second start. She's definitely got the class,” De Paz said. “The race at Aqueduct, with the track conditions, and the way the race laid out as far as pace was a bit against her. She lost to two nice fillies and was no worse for wear after that race.”

De Paz said the shape of the race didn’t quite work out for Be Your Best in the Miss Grillo.

“She broke a step slow and broke out. There were little, tiny things that could have been better,” De Paz said. “She's a nice filly that won and had an easy pace and just sprinted on home that last sixteenth. Our filly was trying, but she would have to have been very quick to catch up.”

Be Your Best has breezed back twice, including a half-mile in 48.88 seconds Friday over the Belmont dirt training track under regular pilot Jose Ortiz, who will retain the mount.

“Her breeze was pretty straightforward,” said De Paz, who will be saddling his first Breeders’ Cup starter. “Jose breezed her and he was happy with her. She's doing well. She arrived at Keeneland this morning in good order and she'll possibly have another breeze there a week out. It's exciting. We're still 12 days away and a lot can happen, but it's exciting to be there.”

De Paz said he will wait for the post-position draw before determining race strategy.

“Her first race, she overcame wide trips both turns and came outside of horses,” De Paz said. “In her second race, she sat behind horses and came up the rail. That was also on good ground. She's handled different situations. For now, we'll just have to see how we draw.”

Barry Schwartz’s New York-homebred Sharp Starr, winner of the 2020 Go for Wand Handicap (G3) at the Big A, will make her next start in the nine-furlong $250,000 Empire Distaff as part of Empire Showcase Day on Oct. 30 at Aqueduct.

The 5-year-old Munnings mare has banked $389,695 through a record of 19-4-3-4, including a win in last year’s Empire Distaff which was contested at a one-turn mile and a sixteenth over a sloppy and sealed main track at Belmont.

Sharp Starr has yet to hit the board in three starts this year, finishing a distant fourth last out in a seven-furlong optional-claimer on Sept. 16 here when racing off a five-month layoff.

“I was surprised she was as far back as she was,” De Paz said of last year’s effort. “There was a good pace to run at as well and Jose picked out the right spots every time he asked her to go. She definitely likes to run on the mud, too.

“It's similar to what happened last year,” De Paz added regarding her recent Aqueduct effort. “We brought her back at Saratoga and gave her the race and got her fit to prepare for the Distaff.”

This year’s Empire Distaff will be run around two turns which may hinder Sharp Starr’s chances, although the filly does own an impressive 9-2-2-3 record at the Big A, including a career-best 101 Beyer for a romping score in a one-mile state-bred allowance in November 2020.

“It seems her best races are at a mile around one turn. Obviously, in that Distaff last year they set a pretty good pace for her to run at,” De Paz said. “With the two turns, a lot will depend on the pace of the race. I would have preferred a mile or a mile and a sixteenth around one turn, but this is the way it came up since we're not running at Belmont.”

The Accelerate colt, out of the Speightstown mare Speightful Affair, is a half-sibling to graded-stakes placed millionaire Mr. Buff, who is by Friend Or Foe. Bred in the Empire State by Chester and Mary Broman, Quick to Accuse exited the inside post and drew off to win by 9 3/4-lengths at second asking here on Oct. 7 in a one-mile state-bred maiden special weight.

De Paz said the colt’s debut effort in August at Saratoga was a good learning experience when fourth in a seven-furlong state-bred maiden special weight after exiting the inside post. The third-place finisher in that event, Jackson Heights, graduated next out in the Bertram F. Bongard at the Big A.

“I figured off of that race he was ready to come forward. The horse that beat us a nose for third came back and won a stakes, so that gave me hope second time out,” De Paz said. “Second time out we drew the rail again, but this time he was very professional. He put himself into the race right away. He got a lot of experience out of that first race.”

De Paz said the 17.2 hands tall Mr. Buff has a wider build than Quick to Accuse, who was purchased for $200,000 at the OBS March Sale of 2-Year-Olds in Training.

“He's by Accelerate and has a bit more of a refined body on him,” De Paz said. “He's good height wise but he's not as broad as Mr. Buff is, but he's a good sized horse for a 2-year-old.”

Schwartz homebred Stonewall Star, a 2-year-old daughter of Flatter, graduated impressively at second asking under Manny Franco in a six-furlong state-bred maiden special weight on Sept. 22 at the Big A.

Last out, she took on the boys and finished third in a thrilling renewal of the six-furlong New York Breeders’ Futurity on Oct. 17 at Finger Lakes.

De Paz said he made the decision to take on the boys at six furlongs as he didn't want to stretch her out to one mile in next Sunday's Maid of the Mist, especially with the long-range target of the $100,000 Key Cents, a six-furlong test for state-bred juvenile fillies on Nov. 20 at the Big A.

Jose Ortiz picked up the mount for the Futurity which featured graded-stakes placed Andiamo a Firenze and stakes-winner Acoustic Ave, who Franco had piloted to a 9 1/4-length score in the Aspirant in September at Finger Lakes.

“She drew inside with speed horses on her outside and I was hoping those two horses would hook up and we could sit a trip behind them and they would come back to us. But they just had a little bit more in the tank,” De Paz said. “At the quarter-pole, she's jumping on heels and in the bridle. Once they got to the lane, she was right there with them.

“It was a very good effort on her part and I'm really proud of her,” he added. “Those were seasoned horses for her to run at and her effort was really good.”

De Paz said Franco tipped his cap to the filly in the days following the Futurity after working a few horses for his barn.

“When they were in the stretch, Manny said, 'Oh no. The filly is going to beat me,'” said De Paz, with a laugh. “Even though he won, he said the filly was very impressive to run against those horses and be right there. She's just a game, honest filly.”

Michael J. Ryan and Sarah Sutherland’s New York-bred Noble Emotion finished a non-threatening seventh last out in the Grade 2 Nearctic, a six-furlong turf test for 3-year-olds and up on Oct. 8 at Woodbine. He will look for redemption in a Thursday optional-claimer here, sprinting six furlongs over the turf in Race 7.

The 5-year-old Noble Mission gelding, who boasts a ledger of 16-5-0-1 for purse earnings of $278,962, garnered a career-best 93 Beyer two starts back when nosing out a win in a 5 1/2-furlong turf sprint at the Spa that saw Nearctic winner Cazadero finish third. The runner-up of the Spa score, Comedy Town, exited that race to finish second, by a nose, in the Laurel Dash.

Noble Emotion exited the inside post in the Nearctic and steadied sharply down the backstretch before being forced wide through the turn and wider still in the expansive stretch run over the E.P. Taylor Turf Course.

“It wasn’t the best of trips and doesn't justify him as a horse. We'll just have to draw a line through it,” De Paz said. “A lot of things happened through the first eighth that isn't going to set up a horse and then on top of that going wide around the turn. It was a very tough trip.”

Jose Ortiz is named to ride from the inside post.

“Unfortunately, we've drawn inside three times in a row now, but that seems like the logical place to run him at this point,” De Paz said.