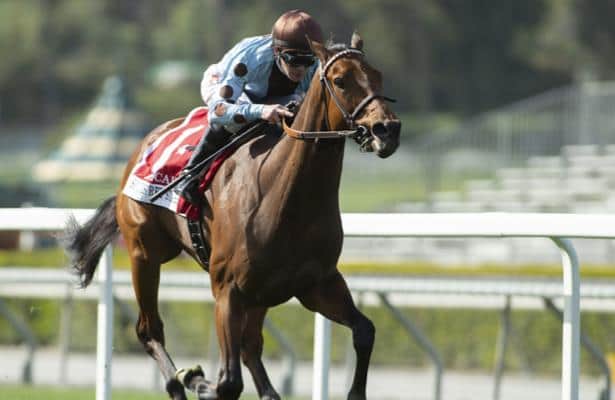 With Tyler Baze back in town to handle the front-running riding duties, DP Racing’s Epical cruised to an impressive 2 ¼ -ength win in Friday’s Grade 2, $200,000 San Luis Rey Stakes at Santa Anita Park. Trained by James Cassidy, the 4-year-old Uncle Mo gelding got a mile and one half on turf in 2:24.60.

Breaking from the rail in a field of five older horses, Baze was able to make an easy lead in the early run down the hillside to the dirt crossing as Epical was well within himself under a long reign when the field passed under the wire for the first time. With longshot Marckie’s Water content to sit second up the backside, Baze asked Epical for his best leaving the three-furlong pole and enjoyed a three-length advantage over both Marckie’s Water and Unapologetic turning for home.

“I came back to ride him,” said Baze, who has for the time being, relocated to the Arkansas/Kentucky circuit. “I counted on the trainer to have him ready. I should have won on him the last time, but we got a poor start. They schooled him in the gate and it showed today …Once we got going on the (far) turn, he showed his big turn of foot.

“I like to ride fast horses in marathon races. He was relaxed and when it was time to go, he took off…I’m leaving tonight. I’m going to be riding the rest of the Oaklawn meeting and then head to Churchill Downs. We will play it by ear. I love Santa Anita. This is my home.”

“You know the first time Tyler rode him, he said, ‘I think he could go three miles.’ There aren’t too many three-mile races, but he’s got speed and he doesn’t mind the horse next to him that goes with him and it doesn’t seem to rattle him at all. He’s very kind and he’ll go as far as you want to go.”

Last for nearly the entire trip, Beach View, who was ridden by Rafael Bejarano, rallied well late to finish second by a half length while never threatening the winner. The second choice at 2-1, he paid $2.80 and $2.40.

Ridden by Mario Gutierrez, Marckie’s Water was off at 9-1.