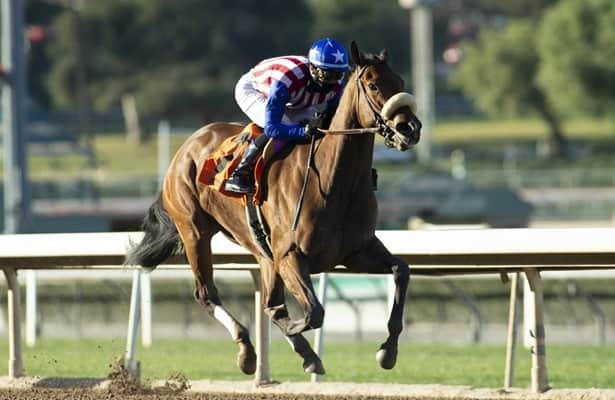 In a thoroughly dominant performance, Kaleem Shah’s Bella Vita, idle since May 16, made short work of six rivals as she powered to a 4½-length win in Sunday’s $100,000 Spring Fever Stakes at Santa Anita. Ridden by Flavien Prat, the California-bred filly by Shah’s 2014 Breeders’ Cup Classic winner Bayern got six furlongs in 1:10.33.

Breaking alertly from her outside post position, Bella Vita looked to be in control the entire trip, as she sat a measured fourth, about two lengths off the lead 3½ furlongs from home. With Square Peggy rushing up on her outside, Bella Vita shifted out and in an eye-catching move, collared her approaching the quarter pole and drew off to win in-hand with her ears pricked.

“Bayern certainly brings back lots of memories and this filly, she was bred by John Sikura and I’m so happy for John,” said Shah, who ponied up $400,000 to purchase Bella Vita out of a 2-year-old in training sale in April of 2019.  “I hope that this filly, along with many other progenies of Bayern, go on to bigger and better things.”

Off at 22-1, Dr Wysong rallied wideout under Abel Cedillo and paid $4.40 to show while finishing 1 ½ lengths in front of Cassie Belle.

Sponsored by the CTBA, the Spring Fever is part of the CTBA’s Golden States Series, for eligible California-bred or sired runners.