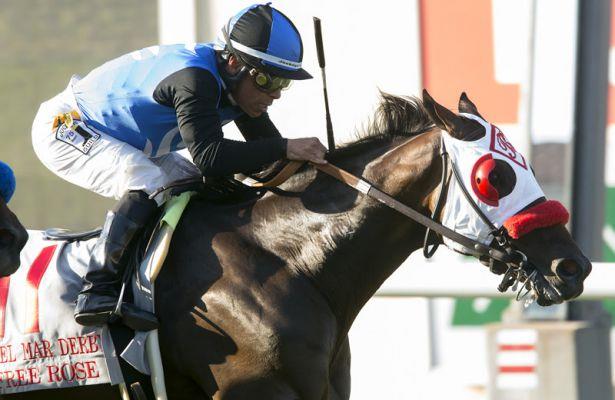 Del Mar’s final weekend of its third fall Bing Crosby racing season will feature an exciting stakes doubleheader – the Grade II $200,000 Bayakoa Stakes for older fillies and mares and the Grade I $300,000 Hollywood Derby for three-year-olds.

The 15-day meeting comes to a conclusion Sunday, headlining the Grade I $300,000 Matriarch Stakes for older fillies and mares at one-mile on the grass. Post time for the first of nine races both Saturday and Sunday will be 12:30 p.m.

The Bob Baffert-trained Vale Dori has won two of four starts since being imported to the U.S., most recently scoring by ten and one-quarter lengths at Santa Anita. Last summer at Del Mar, she easily won the restricted Tranquility Lakes Stakes at one mile.

Pre-race favorite in the Hollywood Derby at nine furlongs over the infield grass course is east coast invader Camelot Kitten, a consistent son of Kitten’s Joy trained by America’s leading conditioner in terms of money won this year, Chad Brown. Irad Ortiz, Jr., one of the foremost riders in New York, has the call on Camelot Kitten, a winner of five of ten starts, including four stakes.

The Derby appears to be wide-open, however, and an upset would not be too surprising given the depth and quality of the twelve-horse field.

The program is graced by the presence of four top riders from the East Coast, multi- Eclipse Award-winners  Castellano and  Velazquez, plus Geroux and Irad Ortiz, Jr., joining locally-based Hall of Famers Smith,  Stevens,  Desormeaux and Alex Solis to compete at Del Mar Saturday.