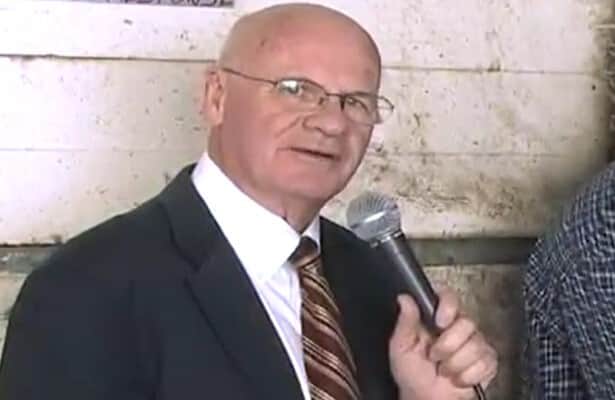 Sam Spear and Northern California racing went together like San Francisco and the Golden Gate Bridge. Longtime fans could not think of one without the other.

For a half-century he was on radio, on TV, in print and online, doing whatever it took to promote horse racing. Spear, a native of Oakland and a lifelong resident of the Bay Area, died Saturday at age 72.

RIP Sam. We will miss you.

The San Francisco Chronicle said Spear suffered from sarcoidosis, a rare disease that can inflame the skin and lungs.

Spear was to the Bay Area what the late Harvey Pack, who died in July, was to New York. Both were charismatic figures who turned their magnetic personalities into roles as racing ambassadors in their corners of the country.

With his catch phrase of “I’ll see you – at the races,” Spear punctuated his nightly TV show of racing highlights from Golden Gate Fields and Bay Meadows for 39 years. Started in 1978, the program gained momentum in a media world that preceded TVG and round-the-clock, digital video feeds.

Spear maintained his relevance as he always had, adapting to every role he was asked to perform. He was the longtime media-relations director for the Bay Area’s racetracks, providing information and fielding media requests even after his nightly TV duties ended. More recently he hosted a racing show on KNBR Radio in San Francisco.

“I hung on every word the man said,” former KNBR program director Jeremiah Crowe said on Twitter. “The Bay Area sports scene lost a true legend. His wisdom and kindness will be missed.”

Extremely saddened to hear about the passing of my friend/old partner Sam Spear.

I hung on every word the man said, and the Bay Area sports scene lost a TRUE legend.

His wisdom & kindness will be missed… RIP Sam, and we’ll see you at the races on the other side ?? pic.twitter.com/iM4pNTgu8w

Also an expert on baseball, jazz and wine, Spear’s list of friends ranged from Joe DiMaggio to MC Hammer. His résumé included roles with the San Francisco Giants and Oakland Athletics. On the side he officiated high-school and college baseball and basketball and took pride in having been on the field or on the court with future professionals.

According to the Chronicle, Spear was preceded in death by his wife Johanna and survived by his partner Barbara O’Neill, a daughter, three stepchildren and five sisters.