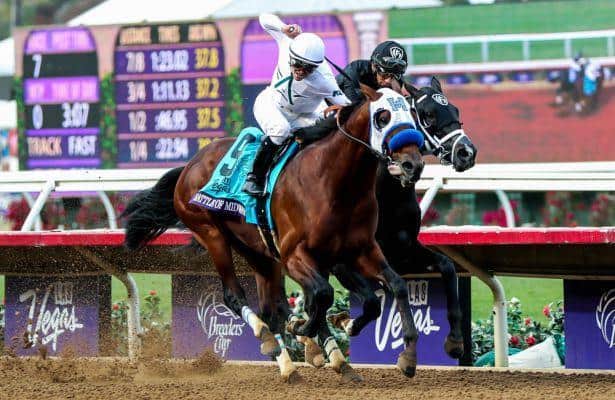 By Anthony Jaskulski / Across the Board

DEL MAR, Calif — It was a fight to remember Friday for the connections of longshot Battle of Midway, who blew apart a group of seven horses before sinking Sharp Azteca in a head-to-head stretch duel at Del Mar for the $1 million Breeders’ Cup Mile.

The son of Smart Strike — a victor in two of his last three runs, and now a perfect 2-for-2 at Del Mar — clipped a field that included Accelerate and post-time favorite Mor Spirit at a final time of 1:35.20 going around two turns.

"Well, horses for courses," said trainer Hollendorfer. "He likes Del Mar and ran a huge number here, so that was part of the thinking in running him in the Breeders' Cup (Dirt) Mile -- that he would like the track."

Battle of Midway became the third 3-year-old to beat older competition in the Dirt Mile, joining Goldencents and Caleb’s Posse. In doing so, he improved his record to 10-4-2 with earnings of $1.9 million.

Battle of Midway stuck to a stalking style Friday with Flavien Prat aboard, hitting the 1/4 pole running four lengths outside on the first turn. Eventual runner-up Sharp Azteca dictated the pace at clips of 22.94, 46.95 and 1:11.13 before engaging in a stretch duel with the winner.

“The outside post helped us because then he wasn’t pushed down inside with nowhere to go,” the trainer said.

Battle of Midway has remained on the California circuit since his third-place finish in the Kentucky Derby. His West Coast counterparts, including Bob Baffert stablemates Cupid and Mor Spirit, both missed the board along with Accelerate.

Another longshot, Awesome Slew, ran third in the Dirt Mile.

Battle of Midway, who took to the starting gate with blinkers on for the third time, never lost comfort in a race where Prat and the product of Winstar Farm, LLC & Don Alberto Stable, saved their best for the stretch.

Hollendorfer likened Prat to a rider who “the more they win, the more you have to use them.”

“You know, I’m embarrassed to say I don’t really have a plan after this,” Hollendorfer added of what’s next. “This was the point race, and we got the job done, so we’re going to try to enjoy that for a while.  We’ll look and see what both sides want to do here. I’d sure like to run him as a 4-year-old.”

Battle of Midway goes ALL the way in an electrifying Las Vegas Dirt Mile! #BC17 pic.twitter.com/fsZkkJ8igN